10 Facts You Didn’t Know About Iguanas 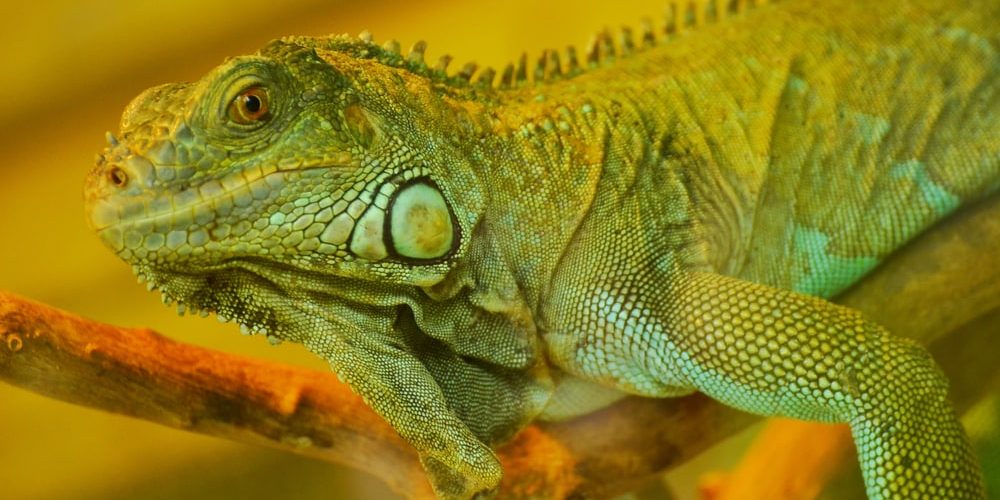 1. There are around 35 species of iguana

And they’re all a bit different – although the family has undergone some reclassification in recent years.

The iguana that most people are probably most familiar with is the common Green iguana, which is also a popular pet. Some others include the Marine iguana and the Lesser Antillean iguana (both of which we’ll learn more about later), the Desert iguana which doesn’t even really look like an iguana, and the Spiny Tailed iguana which can be smaller than a meter in length.

Iguanas are native to tropical areas, including Mexico, Central America, South America, and the Caribbean. Being cold-blooded creatures, they spend a lot of time lazing about in the sun in order to regulate their body temperature. It’s all right for some! But although they do lie around in the sun a lot…

Iguanas certainly look cumbersome, and they’re mostly big creatures – some have been found to be over 2 meters long and over 19 pounds in weight. However, they’re actually quite fast animals, some smaller species are able to run at over 18 mph. They’re nimble climbers and are able to make short leaps from branch to branch, and some have been observed falling up to twenty feet with no harm to their health. Not recommended for humans.

4. Most are good with heights, but some prefer the ocean

Most lizards are predominantly land animals, and spend their time eating, resting, and regulating their body temperature in the sun. That being said, some species of iguana don’t mind getting a bit wet. The Marine iguana, found only on the Galapagos Islands, has the ability to forage in the sea, something no other lizard can do. It feeds mostly on algae and can dive up to 30 metres, remaining underwater for more than half an hour if it needs to.

These iguanas also have mutualistic relationships with some other animals, such as Mockingbirds and crabs which feed off the mites and ticks on their skin, and they’re often found living close to Sea lions to no apparent mutual benefit. The two simply ignore each other. How rude!

5. But it isn’t only the Marine iguana that likes taking a dip

The aforementioned Marine iguana lives predominantly off of algae, hence its proximity to the ocean. But other iguanas are generally good swimmers, too. One way they attempt to escape from predators is by jumping into the nearest body of water and swimming away.

However, some hawks, a natural predator of iguanas, have developed a technique of singing which makes the iguana freeze, meaning it can easily swoop in and pluck it up in its talons. Poor iguanas!

6. They’re vegetarians – but they aren’t that strict

Iguanas are mostly vegetarians, feeding on leaves, flowers, fruit and shoots. Some have, however, been observed eating bird’s eggs and small insects in the wild and occasionally mice and fish in captivity, a bit like when some vegetarians can’t help but get a cheeseburger after a night at the pub. We all know one…

There is discussion about whether it’s healthy for them (iguanas, not vegetarians) to eat a diet containing so much protein. Some scientists argue it’s bad for their digestive system, whereas others have observed no health problems in iguanas who eat a bit of meat. To be on the safe side, ExoticDirect recommends you don’t feed your iguana any meat and let them get their vitamins from greens!

7. They’ve got eyes in the backs of their heads

Well, not really. What they do have, though, is a so-called ‘third eye’, also known as the parietal eye. This eye can’t see like a regular one, but senses movement and shifts in light. Iguanas use it to detect predators and stay safe. Obviously this technique isn’t 100% effective when the hawks are around, though, and there’s another problem, too…

8. Some iguanas have become endangered due to unnatural predators

Numbers of the Lesser Antillean iguana have been sharply declining and are now considered critically endangered. This is due to habitat destruction, hunting, hybridisation with the Green iguana and the introduction of feral predators.

The latter of these is important because these new predators – dogs, cats, and Mongooses, mostly – have a way of hunting the iguana isn’t used to. Iguanas aren’t good at adapting to new threats and can’t properly defend against them, a phenomenon called ecological naivete.

Getting cosy with its neighbours is also a problem: because the more common Green iguana has been introduced to areas in which the Lesser Antillean iguana used to thrive, numbers of the latter have been decreasing. The two species are in direct competition for food, and moreover, because the two sometimes interbreed, the Lesser Antillean iguana has a declining population.

9. And iguanas aren’t so easy to save

Only twice has the Lesser Antillean iguana been successfully bred in captivity. This is because most of the eggs they lay in captivity are infertile. At the Durrell Wildlife Conservation in Jersey, once in 1997 and once in 2000, iguanas were successfully hatched. The first project hatched just one iguana successfully, and the second eight.

The Marine iguana is also a protected species, as it is, while not critically endangered, considered threatened. Feral dogs and cats also pose a threat to them, much the same as they do to the Lesser Antillean iguana.

Added to this is the problem that Marine iguanas have never been bred in captivity, and there’s a big conservation problem.

10. Humans like them as pets, but they don’t do well in captivity

Iguanas are among the most popular pets in the United States. They are generally docile creatures (though they can sometimes be aggressive in captivity) and can be a rewarding pet to have.

However, they are relatively difficult to care for and many die in captivity within the first year. Make sure you look after your iguana properly by feeding it the correct diet at the appropriate times and ensuring its tank is large enough.

Make sure you’ve done your research and know how to effectively look after your pet. That way you’ll be contributing to maintaining our awesome population of iguana’s, that have it so tough out in the wild.

Pet Tortoise Types And Ways To Care For Them
October 9, 2019

How To Make Sure Your Reptile Is Eating The Right Amount Of Food
October 9, 2019

How To Raise A Healthy And Happy Bearded Dragon
October 9, 2019