Pet Tortoise Types And Ways To Care For Them 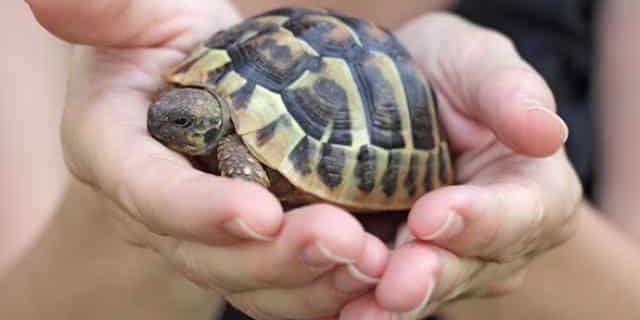 The pet tortoise is a popular choice for young and old alike. Tortoises are the perfect starter pet, as they are low maintenance and easy to care for. Tortoises can live up to 100 years or more, but most people who buy them don’t realize that their needs change over time, so it’s important to know what you’re getting into before deciding on this type of pet.

In this blog post, I’ll discuss some things you should consider when buying your first tortoise – from types of tortoises there are, to ways in which they can be cared for.

Caring for pet tortoises can be a challenging task, but it is not impossible. Tortoises need to have a special diet that is high in protein and low in fat. They also require more space than most other pets because they love to roam around and explore their surroundings. One of the main aspects of caring for a pet tortoise is ensuring its habitat stays at an ideal temperature all day long and does not get too hot or cold. If you are looking into getting one of these beautiful creatures as your new best friend, this article will provide insight into the things you need to know before bringing home your new pet!

Furthermore, if you want to ace the art of caring for tortoises, do not forget to visit https://greedytortoise.com

Out of the 60 existing species of tortoises, we bring you the most popular pet species and how to care for them.

For obvious reasons, the Greek Tortoise is also known as the Mediterranean spur-thighed tortoise. The greek tortoise lives for about 125 years and grows up to eight to 11 inches when fully grown. They need a slightly warmer basking area than other tortoises, with a suitable temperature ranging between 90 and 100 degrees Fahrenheit. The enclosure size for these tortoises should be 36 by 72 inches at the least. Two greek tortoises can be housed together, but they might be prone to fighting each other. Despite being friendly, this species tends to find handling very stressful.

A Hermann’s Tortoise lives for about 50 years, while some have been recorded to live even over 100 years. There are two versions of Hermann’s tortoise –  the Eastern and the Western. The Eastern version grows up to seven to nine inches and has brown to tan color tones. The Western version grows up to five to six inches long and possesses more vibrant colors like oranges and yellows. This species requires an enclosure with a temperature of 70 to 85 degrees Fahrenheit, with a basking area at about 90 to 95 degrees Fahrenheit.

Indian Star Tortoises are known for their shy demeanor and gentle temperament as compared to other tortoise species. This tortoise species does not need to hibernate. The “Star” in their name is derived from the star-shaped pattern on their shells.

Since they live anywhere between 30 to 80 years, they’re definitely a pet that demands a lifetime commitment. The Indian Star tortoise can grow up to five to eight inches, with females growing up to be bigger than the males.

Leopard tortoises are not as common as other pet tortoise species owing to their larger sizes. Due to their gigantic sizes, which range from 10 to 30 inches, they are best suited for outside enclosures at least 10 feet by 10 feet. A regular temperature of around 75 to 90 degrees Fahrenheit and a basking area of 95 degrees Fahrenheit are always a must for this species, which means if you live in an area with a cold climate, you cannot keep them outside.

Leopard Tortoises are also a species that does not hibernate. Despite being known for their friendliness, they are not as keen on being handled too much. As they can live up to 100 years in captivity, they can prove to be a  commitment of a lifetime.

This species is native to South America, where their natural habitat is humid; this keeps them as pets a lot of work. What separates them from various other pet tortoises is their need for a protein-heavy diet and that they can be fed pinky mice. While living up to 50 years of age, they can reach up to a length of 14 inches. A large enclosure of at least four by six feet is required to house the red-footed tortoise. The enclosure temperature for these tortoises should be around 80 degrees Fahrenheit during the daytime and no less than  70 degrees Fahrenheit during the night. Their basking areas should have temperatures at about 95 degrees Fahrenheit.

The Russian tortoise, also known as the Horsfield tortoise, grows up to ten inches in length, with the females being larger than the males. They live for about 40 years. Since they are easy to care for and do not grow to an overwhelming size, Russian tortoises are among the most popular pet tortoise species. They need a habitat that should consist of a basking area at about 95 degrees Fahrenheit, and the non-basking area should be at 75 degrees Fahrenheit or above. The minimum habitat size for a Russian tortoise should be 24 by 36 inches.

Sulcata Tortoises are comparatively larger as they can grow up to 36 inches and weigh as heavy as 100 pounds.

This species would live their best life in an enclosure outside where they have ample room to move. They can live for around 70 years or even longer. They need an ambient temperature of 70 degrees Fahrenheit or above and up to 100 degrees Fahrenheit. They are another one of the species that does not hibernate. Despite being large, they are known for their gentleness and their love for human interaction. This species is also called the African spurred tortoise.

Now that you have had brief knowledge about the pet tortoise species and their characteristics, feel free to choose one of the above species and research on them extensively before getting them home.

How To Make Sure Your Reptile Is Eating The Right Amount Of Food
May 27, 2021

How To Raise A Healthy And Happy Bearded Dragon
May 27, 2021

Ten Fascinating Facts About Reptiles
May 27, 2021