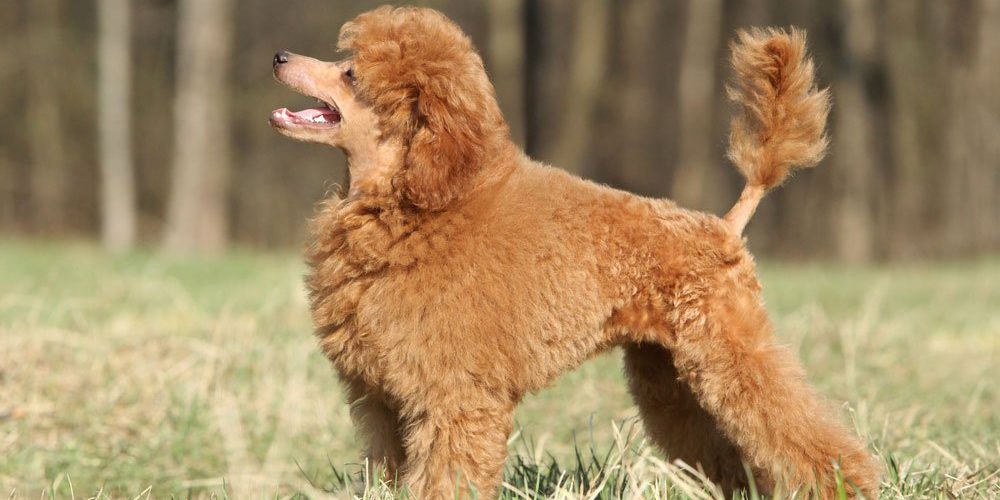 One of the most active and intelligent of all dog breeds, known as the Poodle, is a well-proportioned animal that carries himself proud and confident. As it struts its stuff down a busy sidewalk with its owner, the Poodle has about him an air of distinction and dignity.

Some people refer to the Poodle as a “clown from France”. Others describe it as a gun-dog from Germany. Or is it a Truffle hunter from England? How about a water-dog from Russia? Pin-pointing the origin of the Poodle is like trying to stuff a spring breeze into a closet!

Clearing Up The Confusion, Maybe…

When our research investigates on Russia as the breed’s place of origin, we’re hard-pressed to explain how a painting of a Poodle happens to appear in a 1490 oil by Bernardine Pinturiccio. And a painting by Albert Durer (1471 – 1528) shows a dog of this breed clipped in the fashion of the day. Another Poodle appeared in a painting by Franz Snyder in 1595.

Just about the time we’re ready to throw up our hands and go with the “big bang” theory, we discover illustrations of the Poodle which were carved on Roman tombs and other monuments about A.D. 40.

France Is Not The Original Home Of The Poodle

The only thing that can be said with certainty, and some will even dispute this, is that the Poodle did not originate in France. The common name French Poodle, therefore, is a misnomer.

Some historians claim that Poodle was introduced from Germany into Russia, then from Russia to France. Others claim Russia introduced the Poodle to Germany, and German troops brought the Poodle into France. So flip a coin – pick your country – then sit back, relax, and enjoy what has unmistakably become the most popular dog in the world.

No breed can be considered more intelligent. No other breed is more quick and willing to learn. In fact, the first dog in the recorded history of obedience degrees to receive all titles was a Poodle. It was a Poodle who performed before an audience of 75,000 baseball fans in Yankee Stadium.

Not Just For Good Looks

Although classified as a non-sporting breed, the original Poodle was a top sporting dog. He was known for his ability to swim, and it was precisely because of this that the Poodle became known as the “water dog” in Germany and the “duck dog” in France.

The custom of clipping grew out of the fact that the Poodle’s heavy coat impeded his progress in water. If left unclipped, the coat became a mass of rope-like cords.

It was because of the Poodle’s vitality, dignity, and alertness (not to mention his trainability) that earned him a spot as court jester in the palaces of early kings and queens. In this role, he was usually dressed in outlandish costumes and performed many cunning tricks to amuse the royal guests. From the muddy waters and lakes where he excelled as a sportsman, to the stage where he excelled as a showman in circuses, vaudeville, and nightclubs, the Poodle as well earned his title of top dog.

Regardless of how or where the breed originated, he is undisputedly the most popular breed in America, Canada, Denmark, France (where he was once known as the national dog of France), Sweden, Australia, Germany, and Italy. The miniature-sized Poodle is the most popular in Australia, South Africa, and Great Britain.  He’s also considered the favorite non-sporting breed in New Zealand.

Most historians agree that the standard sized Poodle came first, from which later evolved the miniature, and from the miniature evolved the popular Toy Poodle. Some noted historians claim that the Toy Poodle didn’t come into existence until halfway through the 19th century.  However, that theory leaves unexplained how Spain’s Goya managed to include a Toy Poodle in one of his 18th century paintings.

Poodles were originally recognized in only three colors: black, brown, and white. Now however, a much wider range of colors can be seen which include varying shades of cream, apricot, blue, silver, and many more.

There are three recognized sizes:

1. The Standard Poodle
2. The Miniature Poodle
3. The Toy Poodle

It seems rather odd that in this country, a Toy Poodle must be under ten inches to qualify as a Toy, while in England, the limit is eleven inches.

The Poodle is unique in another way, too. Poodles do not shed their coat, which might lead one to believe that reason alone would account for the Poodle popularity, but this is not so!

A Poodle requires more grooming than perhaps any other breed. As his coat grows, mats and tangles appear which are unsightly and bothersome.  This condition necessitates frequent grooming and periodic clipping. Although original Poodles were clipped to assist them in their waterworks, Poodle clipping today has evolved into many variations, some which appear rather grotesque.

Poodles today can be found sporting the lamb cut, continental clip, saddle clip, English saddle clip, kennel club, Dutch clip, and many more. Although there are many kinds and styles of Poodle clips, only three are accepted by all Poodle clubs, including the Poodle club of America.

The clips that are acceptable in the show ring are the puppy clip (eligible to be worn by puppies under one year of age), the English Saddle, and the continental clip. Of the trims not allowed in the show ring, the kennel (or sporting) clip is the most popular.

Each year there are several hundred thousand Poodle registrations processed by the American Kennel Club. Obviously, the virtues of the Poodle, including his trainability and companionability, far outweigh the troubles of grooming this breed.

Indeed, to most Poodle owners grooming isn’t just considered a “problem”. It is considered one of the joys of owning a Poodle. Many have learned do-it-yourself clipping and very plainly enjoy pampering their pets.

Accessories for Poodles have become a billion-dollar business, and seldom is a Poodle seen dressed up without a least a pretty ribbon or two. Most Poodles thoroughly enjoy being fussed over and dressed up. They love the applause, and they love the attention. It has been found that a Poodle cannot be reasonably smart or happy without close human companionship.

Unfortunately, as with every other breed that has experienced a quick surge of popularity, the Poodle has suffered greatly in both looks and temperament since hitting the top 10 most popular dog’s list.

The damage has been done by the so-called “puppy mills” – breeders who give little or no thought to pedigrees or improvement of the breed, but merely to selling dogs of any inferior quality. Despite this sorry situation, it is still possible to acquire a handsome, intelligent Poodle with a reasonable financial investment and the use of a little common sense.

With an uncanny knack for taking advantage of weak-willed owners, the Poodle can often dominate the owner/dog relationship.  For those whose Poodles are of the “high-strung” variety, obedience training and the application of basic discipline make for a happier relationship.

Very active and generally long-lived, the Poodle serves well as a playmate of the young, companion to the elderly, watchdog, and family pet.

Although considered one of the hardiest of all breeds, it must be said that the Poodle is prone to vertebrate trouble, blocked lacrimal ducts in the eyes, chronic ear infection and even epilepsy.

Suitable for almost any environment, the Poodle is a joy to train, a pleasure to own, and a loyal friend to its owner. It’s easy to see why he has become one of the most popular dogs in the world.