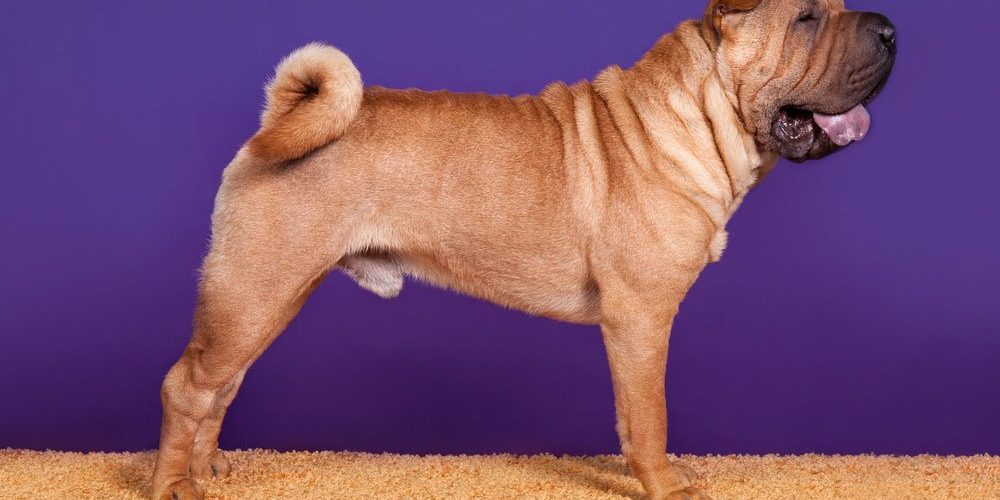 Although the exact origins of the Chinese Shar-Pei is unknown, experts agree that the breed may be connected to the Chow Chow. Both breeds stand a good chance of sharing the same ancestry, and of course both are from China.

Further evidence suggests that the Chinese Shar-Pei was in existence by the 13th century. Stout, wrinkly dogs were depicted in writings during this time. The breed may have even existed in the southern provinces of China, approximately 200 B.C.

The reason why its history is so hard to trace is because most of the records that relate to the Chinese Shar-Pei were lost or destroyed when China became a communist country. During this time the breed was used by peasant farmers dog fighters, guard dogs, and even as a hunter of wild boar.

Soon after China became communist, the majority of the country’s dogs were completely eliminated. A few breeds were left in existence outside of city areas and several Shar-Peis were bred in Taiwan and Hong Kong. The breed was officially recognized by the Hong Kong Kennel Club in 1968.

It was during this same time period that groups of Chinese Shar-Pei dogs made their way to the United States. But it was in 1973 that more dog fanciers became familiar with the breed when an article was published that explains the breed’s alarmingly low numbers.

The Chinese Shar-Pei was considered one of the world’s rarest dogs at the time and dog enthusiasts made their best efforts to revive the breed. These efforts paid off. The Chinese Shar-Pei went from the brink of extinction and rose to new heights of popularity. In fact, they are one of the most recognizable dog breeds in the United States today.

The Chinese Shar-Pei has a personality that can best be described as independent, bold, and stubborn. These dogs have a serious temperament which many people describes as “self-possessed”. However, don’t let its rough-edged attitude fool you. The Chinese Shar-Pei is a highly devoted pet that is loyal and protective of its family. It is generally well-behaved around other pets in the house but may be overly aggressive towards strange dogs and other animals.

Taking Care Of Your Chinese Shar-Pei

This breed will need daily physical exercise and plenty of mental stimulation. Activities such as fetching games and long walks are plenty to fulfill these needs. The Chinese Shar-Pei is not necessarily suited for all-around outdoor living, so it’s best to divide its time between being inside and outside.

Grooming requirements are minimal, with the occasional brushing needed approximately one time weekly. However, some extra attention will be needed for the dog’s facial wrinkles. Check the skin folds to make sure that no irritation is breaking out.

Healthy Shar-Pei dogs have an average life span of approximately 10 years.  Major health concerns that may come up are CHD and entropion. Minor issues include amyloidosis, otitis externa, patellar luxation, skin fold pyodermas, allergies, and hypothyroidism. Fever breakouts are also quite common in this breed.