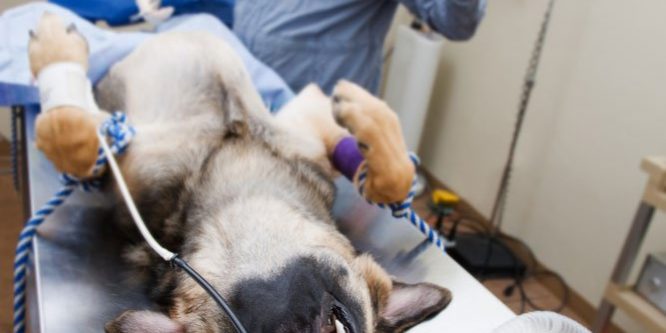 One of the most potentially serious conditions a German Shepherd can suffer from is something called Bloat. In scientific terms, it’s more commonly referred to as GDV, or Gastric Dilatation Volvulus. The stomach becomes bloated with air or fluid, often accompanied by a twist (volvulus), as it rotates around the esophagus and the duodenum.

The condition is painful, unhealthy and potentially life-threatening. Why it occurs isn’t completely understood, but the condition and treatment are well known, provided it can be caught in time.

One sign to look for is any ‘unproductive’ vomiting or inability to belch. If your Shepherd is unable to regurgitate after trying for a few minutes, don’t panic. It may be that they simply don’t have anything to bring up. But if it occurs when they’ve just had a meal, proving they have stomach contents, a call to the vet is in order. Sometimes they will be able to produce some material, but if it appears foamy then make that call.

Though the causes are still murky, there are several factors that may be involved. Genetics is clearly one of them, but diet and eating habits may be more relevant. Peas, onions, beans and other foods can cause an excess of gas to build up. If the stomach twists that gas can get trapped. Feed only high quality dog food always, and reduce the size of meals if you suspect GDV.

Hyperventilation may produce an excessive intake of air which can become trapped. This can lead to breathing difficulties, especially for older dogs. Avoiding stressful situations when possible is called for. Shepherds aren’t particularly fearful dogs, but some react badly in the face of thunderstorms and other loud noises. Try to provide a quiet room and a calming voice.

An extended stomach is a possible sign of Bloat. By the time this stage is reached, the problem is serious and you should seek a vet’s attention. Feel the dog’s stomach when he is in a standing position. It should feel relatively soft and aligned with the body. If it’s hard, extended or sounds hollow when tapped gently, you may be dealing with a case of Bloat.

GDV can cause a disruption of proper blood flow, as the vessels become constricted from pressure and twisting. This can interfere with a number of important body systems. Oxygen levels in the blood may become reduced, stomach cells may begin to die, and toxins and bacteria can be released into the bloodstream. Kidney failure is a possibility. Cardiac Arrhythmia or irregular heartbeat can occur. All of these require professional medical treatment as soon as possible.

If you suspect your German Shepherd has GDV or Bloat, stay calm. Look for the signs and get on the phone with your vet. He or she can best decide whether drug treatment or surgery is warranted.