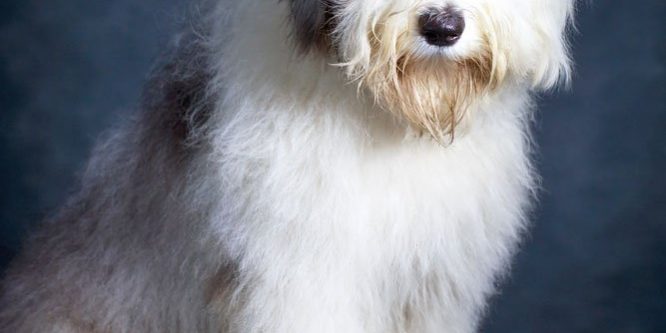 This dog breed originated in the western part of England and is said to be connected to the Russian Owtcharka or the Bearded Collie. At one time, the Old English Sheepdog’s sole purpose was to defend flocks and herds from being attacked by wolves.

By the middle part of the 19th century, Old English Sheepdogs were being used to drive sheep and cattle to market. They were considered working dogs, therefore the owners were exempt from paying dog taxes. And to prove that these dogs were actually used for work, their tails were docked as proof of occupation. This tail docking has remained a custom even into modern times, which is the reason for the dog’s nickname “Bobtail”.

The Old English Sheepdog was first shown sometime in the late 1800s and became a popular show dog exhibit by the early 1900s. They were officially recognized by the AKC in the year 1905.

Although it took some time for this dog to become popular as house pets, the 1970s proved to be a booming period for many households bringing the Old English Sheepdog in as an added member of the family. This thrust in popularity was mainly the result of commercials and other media outlets which depicted Old English Sheepdogs for various roles and in advertising.

The Old English Sheepdog is considered to be a happy-go-lucky canine that is both gentle and well mannered. They tend to be a bit comical and on the jolly side, especially when at home and trying to amuse members of the family. This dog thrives on companionship and loves to be around people.

Genetically gifted for herding flock, it brings the same attitude towards children in the house and displays high levels of loyalty and protection. Old English Sheepdogs are one of the highest rated in terms of affection, friendliness towards strangers, and friendliness towards other pets.

Like all dogs, the Old English Sheepdog will need daily exercise through long walks or medium-paced jogs on the leash. This dog specifically enjoys herding so if you live on a farm or large area of land with other animals, it will make the perfect setting.

Old English Sheepdogs can live outside so long as the weather is cool, but should have access to the inside at all times. This is one dog that does not do well in hot weather. As far as grooming is concerned, their thick coat will need a thorough brushing about every other day or else it may form mats and attract dirt and debris.

The average lifespan of the Old English Sheepdog is approximately 10 years, with some living up to 12 and 13 years. The only major health concern to worry about is CHD. Minor health issues that may come up include PRA, gastric torsion,  hypothyroidism, cerebellar ataxia, otitis externa, deafness, retinal detachment, and cataracts.