Dog Communication: Are You Listening? – Part 2 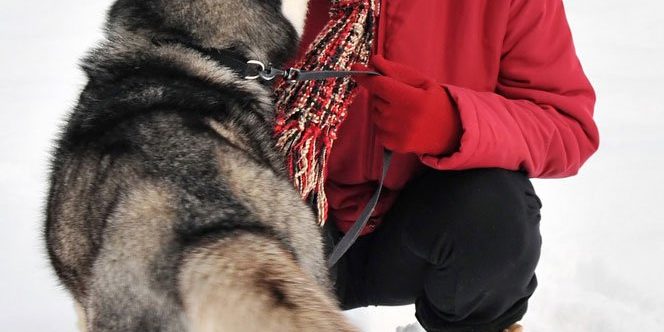 When you verbally ask someone a question you expect an answer, right? A well-mannered, thought-out response is always appreciated and humans talk with their mouths and voice boxes to respond. This is how we interact, mostly with words to let others know how we feel.

Dogs, on the other hand, communicate in a very different way. Yes they bark and use their vocal cords to cry about something, but the number one way to read how a dog is feeling or  what he wants you to know is by looking at his tail.

As your dog wags his tail in happiness, he may also exercise the rest of his body to tell you that you are a welcome sight. He may greet you by jumping, dancing around, and attempting to lick your face.

As one dog trainer, Chris, tells of his German short-haired pointer, named Tiger, your dog can let you know when he is approaching a place which associates with comfort and happiness.

When Chris, who spent many hours out of the house to play golf and hunt, would come home from his long day and driving hours to get home, his wife would comment on how Tiger’s ears would perk up and the dog would show ripples of excitement up and down his back in awaiting Chris’s return.

What is amazing is that these signs of excitement to greet his owner at the door, Tiger would start to become anxious and happy when Chris was still more than an hour away driving home.

In addition to their expression of elation, dogs many times warns their owners of danger. You have probably heard many emotional stories of dogs scratching at the bedroom door to warn the family that the house was on fire. It happens all of the time.

One woman was suffering a heart attack while her dog literally broke through the backyard screen door to get to the husband, barking fiercely in the attempt to get the husband’s attention of what was happening inside the house. It worked – the woman survived.

Dogs also communicate with people by using their head and nose as part of the body actions. My three-year-old Dachshund nosed a message to me one afternoon. Sandy had learned that the covered candy dish on the coffee table was a good place to satisfy her sweet tooth.

This particular day, I was sitting on the couch reading the newspaper, and I wasn’t paying attention to Sandy. She jumped up on the couch and nudged me with her nose. When I looked at her, she gave her head a jerk, pointing her nose straight at the candy dish.

After sensing that I knew what she wanted, she began to jump up and down as if to say, “Please, please, please! Just one little piece!” I had understood very well what my dog was saying with her nonverbal head and nose language.