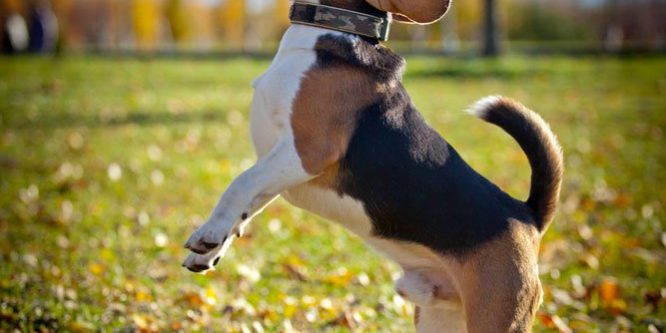 Beagles are a paradox. They’re among the friendliest dogs around, similar to Golden Retrievers. Yet, they can be very stubborn and even assertive, especially with other animals. Reinforcing the desirable traits and suppressing the ones you don’t want can be a real challenge. But when it comes to Beagles, the struggle is well worth the effort.

Beagles love to play. That comes in part from their breed’s history as hunting dogs. A dozen dogs would be pressed into service for a fox hunt, where their unique howling and bark alerted hunters to the location of the prey. Now, they are as likely to bay at the moon just for the sheer fun of it.

And fun is what Beagles are all about. Their medium size and compact bodies give them lots of staying power and make them easy to take on a hike, an outing to the park, or just a walk around the block. So long as they get to sniff and explore, they’ll be very happy with the experience.

Part of that joy is their love for being with people. Rarely wary of strangers, they look at those outside their human ‘pack’ more with curiosity than concern. Like any small, active dog they can be a little rough with young children they encounter along the way, though. They should always be kept on leash unless they’re in surroundings safe for the dog and anyone else nearby.

That occasional disobedience is more often the result of lack of training than any inherent willfulness. They’re less like Terriers and more like, well, Beagles. Given regular training starting early in life, training that includes lots of exercise, most will be attentive and cooperative.

‘Attentive and cooperative’, however, does not mean ‘docile’. There are few laid-back Beagles. They’re not so excitable as, say, Dalmatians or Shi Tzu (just to give a range of sizes). But they are full of energy and good spirits, always wanting to know what’s around the next corner.

That’s one of the attributes that makes them good hunting companions, singly or in a pack. They’ll follow the leader, whether that is you or the alpha in a pack of other Beagles. Naturally, you should always be the alpha of alphas.

If you retain that leadership role, your Beagle can be trained without excess difficulty. That training is paramount, too, since it will help prevent harm to children in the family, visitors, and other animals the Beagle comes in contact with.

They can be socialized to other family pets, such as cats. But don’t leave them unattended with guinea pigs, rabbits, and such. Their natural hunting instincts can lead to disaster. There are always exceptions, of course. You may have seen them on TV. But as a rule, it’s better to be safe than sorry.

Given the right environment and upbringing you’ll find that these happy-go-lucky dogs will bring joy to you and all they meet. Beagles are not only cute, but always ready to have a good time.