Pocket Beagles, Right for You? 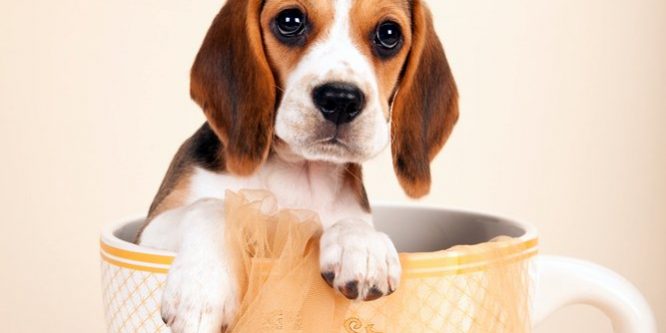 Beagles are among the most popular breeds. But many people have read that they can be a challenge and shy away from selecting one. If that describes you, a Pocket Beagle might be just the right dog for you.

The original breed line died out in England generations ago. Modern Pocket Beagles are created by breeding smaller adults repeatedly. Still, they are true Beagles, not a mixture of Beagles with another breed. They are small – around 8″-10″ at the shoulder, as opposed to the roughly 13″ of the standard. They generally weigh between 10-15 lbs, as distinguished from the Standard Beagle’s 25-30 lbs.

The small size of the original made them delightful companions and useful service dogs when pressed to hunt rabbits and other small game. Their size put them at a disadvantage for fox hunting. But for the most part, they were just interesting to those early breeders.

Today, that size is only one of their values as pets. They’re also known for their wonderful temperaments. Standard Beagles are friendly, happy-go-lucky dogs. But they can be assertive. Pocket Beagles are much more mellow, on average. They may bark at an approaching stranger, but much less often at seemingly nothing at all, as the standard sometimes does.

Many people shy away from smaller dogs because of their tendency to be ‘barky’ and to jump at shadows. But much of that impression comes from observing a Terrier, Shi-Tzu, Chihuahua, or similar dog. Pocket Beagles are small, but much less excitable than those breeds.

That gentle nature makes them especially good with children. Standard Beagles are not mean-spirited, but their active, forceful temperaments can put smaller children at risk if they’re unsupervised. Pocket Beagles are much less likely to snap or even bark during accidental rough handling. Of course, for the safety of the dog and child, it’s still important to keep an eye on both.

Pocket Beagles, like their Standard cousins, come in a variety of coat colors. Many are the traditional tri-colored, tan-black-white. But there are also Black & Tan, Blue Ticked, and others, some of which tend to a reddish hue.

Despite their small size, they still have all the energy of a Beagle. They love to play and explore. They’re also smart, like Beagles in general. Combine the two qualities and you have a dog who is ripe for training and will perform a wide variety of behaviors. Unlike Goldens, for example, they’re less eager to please though more so than Standards, but they love to perform for the sheer fun of it.

If you think this variation on the breed might be right for you, be sure to look for ones that are true Beagles. Some breeders will mix a Dachshund and a Beagle to develop a smaller dog, but the personality will differ. Among other tell-tale signs, Dachshunds have much narrower snouts.

5 Situations When You Encourage Your Dog to Behave Badly
September 14, 2013

How To Determine If You’re a Suitable Dog Owner
September 14, 2013

The Best Dogs To Protect Your Family
September 14, 2013

4 Things to Consider When Choosing a Family Dog
September 14, 2013