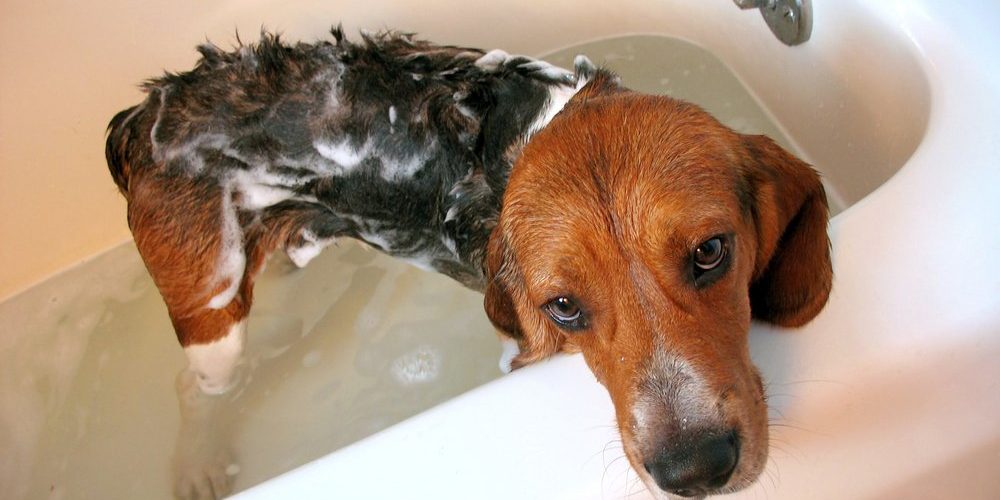 Beagle coats are short-haired and wiry. So, when it comes to grooming, you’ve been blessed with some easy times and some challenges.

Since they’re short-haired, your brushing chores can be quite a lot less than with, say, a Golden Retriever, Collie, or Irish Setter. Still, brushing should not be neglected. A good brush, first with a slicker then with an ordinary bristle brush, offers a number of benefits.

Brushing not only removes dead hair leaving less to accumulate on your clothes and couch, it also helps distribute valuable skin oils more evenly over the surface. Those oils keep the skin supple and free of flaking, which can produce itching followed by hot spots that have to be treated.

Regular brushing is also a low-effort way to keep your dog cleaner. While not as complete as a bath, brushing removes surface dirt, which sticks to the hair and comes off as it falls off. Since too-frequent bathing removes those needed oils, brushing gives double value for your effort, by reducing the need for frequent baths.

There’s no particular expertise required to give your Beagle a good brushing.

Start with a wire slicker, or one that has been rubber tipped. If you use the traditional kind, take extra care not to press down and to brush lightly. Dogs enjoy the feeling of the slicker, but excess pressure can cause raw skin, which encourages self-chewing. As active, slightly high-strung dogs that chewing is already potentially a larger problem with Beagles than other breeds. Improve your odds.

Run the slicker over the surface against the grain of the hair, this is in the direction opposite the way it grows. This helps get down to the skin surface. Again, take care not to get too vigorous. This is the step where you’re most likely to do accidental harm. Then, after a minute of this, reverse direction and smooth down the hair again.

Follow up, at least every other brushing episode (about twice per week), with a standard bristle brush. This removes less hair, but is much more efficient at smoothing out that skin oil. Brush for at least three minutes, taking care to give the area under the ear flaps a good workout. Don’t get too close to the ear canal, but make sure you gently brush the hair just underneath. That removes any waxy substance nearby.

About once per month which can be less often for dogs who stay exclusively in the house, it’s time for a bath. Those same helpful skin oils are a magnet for dirt. Regular baths are especially important for a dog that likes to wander through brush, dig, and roll around. Beagles not only have a hound odor that some people find unpleasant which gets stronger the longer they go between baths, dirt that stays on the skin forever tends to produce skin problems.

You can tell you’re doing your grooming job right when, together with the right diet, you observe your Beagle and see a shiny, good-to-the-touch coat.