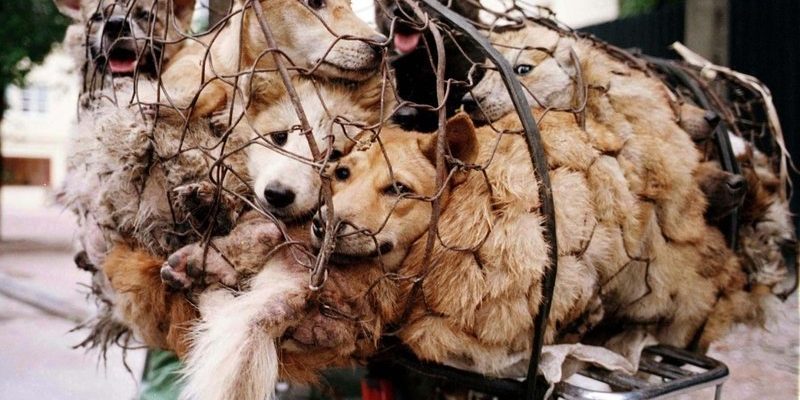 Yulin officials have banned the sale of all dog meat for one week from the summer solstice festival, aka the Yulin Dog Meat festival. A very important domino to fall in our efforts to topple the dog meat trade.

UNTIL NO DOG IS EATEN FOR FOOD, OUR WORK TO END THE DOG MEAT TRADE CONTINUES. SUPPORT OUR YULIN365 PROJECT AT duoduoproject.org.

May 17, 2017 — Breaking news to share regarding Yulin Dog Meat festival 2017. Today I heard from several reliable sources in Yulin that all dog meat vendors will be banned from selling dog meat for one week starting June 15, a few days before the summer solstice day (June 21, 2017, the Yulin Dog Meat Festival Day.)

It was clear from conversations with my sources that the Yulin government is serious in enforcing this ban, and anyone breaking the law will be subject to significant fines and possible jail time. In

the past, I would have been skeptical hearing this news. However, as per my last social media posts, this news is consistent with evidence over the past year that Yulin (and other parts of China) are changing for the better.

Duo Duo Project sends its congratulations to Mr. Mo Gong Ming  (莫恭明) Yulin’s new Party Secretary, for his progressive and modern leadership. We now there will be those who buy dog meat in advance, to freeze and store it, as a way to circumvent this ban, but we still view this action by Yulin officials as a crucial domino on the road to topple the dog meat industry. We also thank all those who helped make the ban happen.

We know there are many challenges ahead and much work to be done to change the hearts and minds of those who eat dog meat, however, we celebrate this achievement, as we continue to focus our efforts toward putting an end to this cruel trade completely.

Blessing of the Pets and Remembrance Ceremony Returns to Dulaney Valley Memorial Gardens, Saturday, October 22, 2022
May 18, 2017