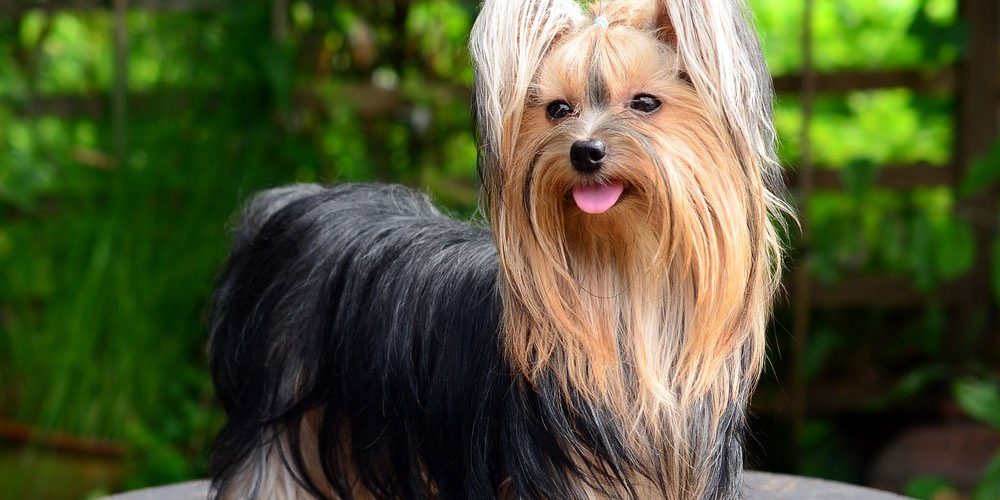 According to the American Kennel Club, the Yorkshire Terrier is one of the most popular breeds. It’s not hard to see why. With its playful attitude and beautiful appearance, Yorkies make the perfect companion, as pet or show dog.

Among the smaller of a mostly small breed (exceptions are terriers like the Airedale), the Yorkshire tops the scales at only about 8-10 lbs (3.6-4.5 kg). He stands only 7-13 inches (15-29 cm) high on average. The head is small, rounded and topped by short V-shaped ears smaller than their Scottish relatives. Yorkshire is an area in northern England, south of the Highlands that were home to Westies and Scotties.

It has a long, smooth coat that is typically tan at the head with black markings between the withers and tail, sometimes with a blue tint. But since they have no undercoat, the long hair is less trouble because Yorkies don’t shed like many other breeds. Small amounts of hair loss is normal with any species that has hair. Shedding is a regular, seasonal process.

But, because the coat is silky and fine it will require regular care to keep it in optimal shape. Since they’re so small that requires much less effort than with many breeds. Trimming is important, though, to keep the hair off the floor and away from the eyes. They also tend to carry less dander and therefore represent a lower risk of producing allergens for those who are sensitive.

Unlike many terriers of their approximate size, such as Cairns or Scotties, they don’t always have the scissor bite of their northern cousins. It may be level. That makes them less of a fighter and more of a lover. They will much less often try to dominate the home the way many other terrier breeds may.

But that attitude, and their small size, means they require a bit more supervision to ensure that larger dogs don’t represent a risk to them. When well socialized they’ll get along well with other dogs in the home as well as the entire family. Some other terrier breeds tend more often to bond with only one or two people in the household.

Still, they have the typical curiosity of any terrier and will investigate the yard and garden whenever possible. ‘Investigation’ often involves digging if they’re left unsupervised. Bred originally to hunt mice and rats, they still retain those instincts in some form.

But that same lively mentality makes them relatively easy to train and they’re happy to take instruction, which they react to as play. Still, like most terriers, they’re fairly independent and can be a little harder to housebreak as puppies.

Treat your Yorkie right and they’ll give you years of love and affection in return.