Why Does My Dog Keep Scratching Itself?

You are here:
Dog Health 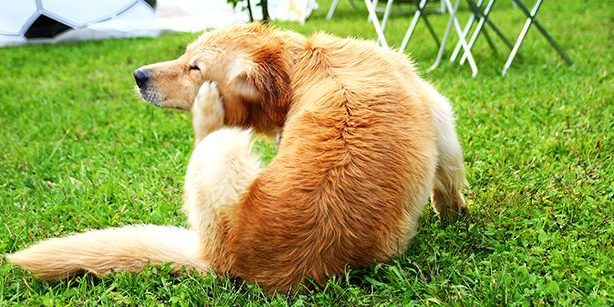 One possible cause could be a skin allergy. Just like humans, dogs can be allergic to all kinds of things from pollen to baths to foods. This can cause dry and inflamed skin that is incredibly itchy.

When it comes to environmental factors such as pollen and mold, it’s possible to treat your dog with antihistamines. A vet may be able to administer these as allergy shots every few months or you may be able to get medication that you dog consumes in its food.

When it comes to baths, it could be an allergy to the tap water or a product such as dog shampoo. Dogs may also get dry skin from being bathed too often, as this can strip moisturising oils from the skin. In such situations, it’s worth lowering the frequency of baths and using hypoallergenic dog shampoo.

As for food allergies, these can be some of the toughest to diagnose – it could be a certain meat such as chicken or beef, or it could be another more obscure food. A vet will be able to introduce a meal plan that involves introducing foods in stages to help determine which food is causing the allergy. This food can then be avoided to prevent future allergic reactions.

Your dog could also be scratching itself because of bug bites, which may be causing itchiness.

Fleas and ticks are the most common form of parasite and can often be spotted by searching through the fur. These could come from contact with other dogs and animals that have fleas. If a dog keeps scratching its ears meanwhile, it could be ear mites. Special shampoos, ointments and ear drops can be used to get rid of these bugs.

It’s also possible to get mosquito bites on dogs. In such cases, special mosquito repellent may be needed to help fend off these bugs.

Your dog may also be scratching itself due to a skin infection. These are often caused by fungus and may produce a rancid smell as well as a dandruff-like substance.

Yeast infections are a common form of infection in dogs that can affect areas such as ears, mouth, paws or the rectum. This may be treated with steroid cream or a special jab. You should also cut out sugar from your dog’s diet as this can sometimes be a cause of such infections.

How much chocolate can a dog eat? Everything you need to know!
November 22, 2018

Dog Owners: Are Dog Supplements Healthy for Your Dog?
November 22, 2018

Signs To Look Out for if You Think Your Dog Has Fleas
November 22, 2018