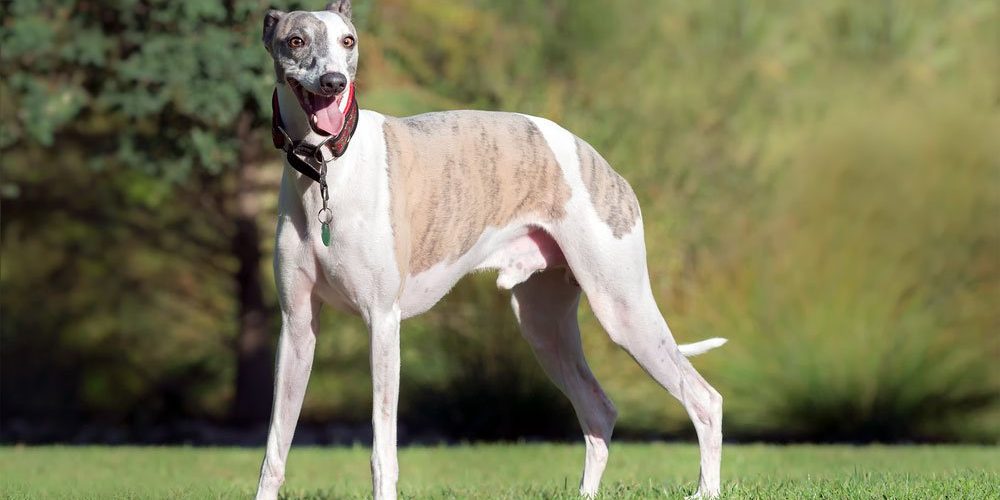 The Whippet is said to have come from a combination of Greyhound dogs mixed with smaller dogs during the 18th century in the attempt to create an animal that could be used by peasants for poaching small game such as rabbits.

With its direct roots from the Greyhound dog, which are genetically designed to race as fast as possible, Whippet dogs entertained people in contests called “snap dog” games.  People would place bets on the Whippet of their choice who would snap up as many rabbits as they possible could before escaping from the game circle.

It is also theorized that these dogs were probably crossed with ratting terriers in order to increase speed and quickness. When the Industrial Revolution started, this was the time that the true Whippet breed started to emerge. Huge numbers of rural workers had moved their entire livelihoods to industrialized areas. Along with them came their Whippet pet dogs that was a good source of entertainment.

Even when there were no rabbits around for the people to watch their Whippets play snap dog competitions, they found out that these dogs were just as excited to race towards other objects, particularly a waving flag. This was the dawn of flag racing, which became very popular amongst coal workers. Referred to as the “poor man’s race horse”, Whippets grew in large numbers.

Whippets were not only used for entertainment, but also to help the poor earn extra income and helped procure food for the family. These dogs were loved, valued, and shared everything with its human companions.

Whippet racing is still somewhat popular at current times, but it never took off quite as commercially as Greyhound racing did. As a result, it remains an amateur sport. The AKC officially recognized the breed in 1888 and through further mixing with the Italian Greyhound, many beautiful and aesthetically appealing Whippets have been born and raised in many family households.

Of all of the sighthound dogs, the Whippet is claimed by dog enthusiasts to be the most obedient and demonstrated. If you are looking for a quiet house dog that is a totally devoted and loyal companion, this dog will make the perfect pet. Whippets are extraordinarily gentle with kids and is on the overly-sensitive side, both mentally and physically. They do not fare well when treated harshly or yelled at.

Taking Care Of Your Whippet

Whippet dogs love to run but can also do very well in a small-sized apartment, so long as daily walks are given. While many dogs can sleep and live in standard conditions, Whippets need a very warm and soft bed to be comfortable in. It absolutely hates cold weather and is not meant to live outdoors. Grooming does not take much work, if any at all. The hair on their coat is extremely short and it rarely gets that musty “doggy smell” most dogs get.

Whippet  dogs have a lifespan of up to 16 years, with the average being 13 to 14 years. They are very healthy with only one major health concern to watch out for, and that is potential eye problems. There are absolutely no minor issues to worry about and veterinarians suggest that you have your Whippet tested for eye problems throughout its life.