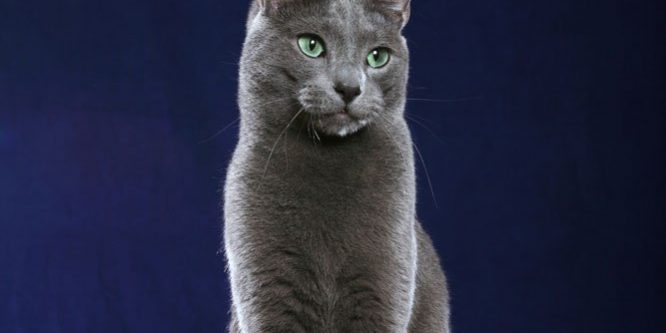 If you are concerned that a cat could ruin your furniture or make too many messes in your home, then you may want to consider the cat breed that many cat fanciers consider to be the most house friendly, the Russian Blue. These cats, which originated in Russia before the eighteen hundreds, have an undeserved reputation for being unfriendly and withdrawn, because they are so timid around strangers. In reality, the Russian is a very affectionate and intelligent cat, but keeps his affection for family members.

The Russian Blue was originally known as the Foreign Blue, and has also been called the Archangel Cat, the Maltese Cat, and the Spanish Blue. However, no matter what people call this breed, the Russian is an elegant, sophisticated looking gray blue cat with a face that seems to wear a perpetual smile.

The Russian Blue is a medium sized cat, weighing between seven and twelve pounds. This breed has a triangular face, slightly almond shaped, very green eyes, a tail that tapers gracefully at the tip and a medium sized, muscular body. Although the Russian Blue is the only Russian Shorthair recognized by the Cat Fancier’s Association, there is also a Russian Black and a Russian White. However, these other Russian colors are recognized in Great Britain.

If you are a busy career person and are worried that your cat will be lonely during the day, the self contained Russian is a good choice for you. While these cats will play with your children or try to comfort you when you are ill or depressed, they are also perfectly happy to spend the day alone. They don’t even need the company of another cat to keep them contented while you are away.

Besides being devoted to its family, the Russian Blue is extremely intelligent. More than one Russian has learned to open doors, fetch toys, and come when he is called. With this cat breed’s intelligence and personality, it is no wonder that the Russian has caught the eye of royalty. One of these cats was even owned by England’s Queen Victoria.

Since the Russian Blue is a shorthair cat breed, extensive grooming is not necessary. These cats have a thick double coat that looks great if you simply comb through it once a week. In fact, this breed’s coat is so thick and plushy that there is a legend, hopefully false, that the cats were actually trapped for their fur in the eighteen hundreds in Russia. In addition to giving him an occasional grooming, you should check your cat’s claws to be sure they don’t need trimmed. You may also want to accustom him to having his teeth brushed to prevent future dental problems.

Whether you are a hardworking career person or someone who spends a lot of time at home, the Russian Blue will make you an excellent companion. If you don’t mind that your cat will never greet your guests joyfully at the door, this may be the perfect breed for you.