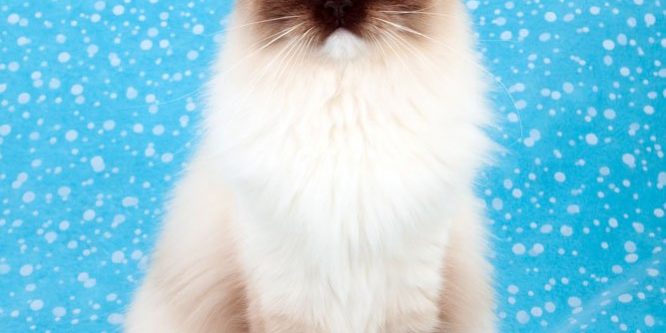 During the mid nineteen hundreds, an American breeder developed a cat breed that was so laid back and relaxed that it would hang limply like a cloth doll when people held it. This breed was developed from a Birman cat and a longhair cat with an unknown ancestry. The breeder called these cats the Ragdoll because of their calm, relaxed nature. Although the Cat Fancier’s Association did not recognize these first cats as the Ragdoll, their descendants became the gentle Ragdolls we know today.

This breed is one of the largest of the cat breeds, weighing between ten and twenty pounds. It is no surprise that such heavy cats have big, muscular bodies. Their heads are slightly round, their ears are small and rounded, and their large eyes are in a brilliant blue color. This breed’s tail is slightly bushy and tapers at the end.

The Ragdoll does not come in a wide range of colors and patterns. In fact, there are actually only four colors accepted by the Cat Fancier’s Association, Seal, Chocolate, Blue, and Lilac. You can find these colors in pointed, mitted, or bicolor patterns, but some breeders avoid mitted cats because they look too much like the breed’s Birman ancestors.

The Ragdoll’s calm demeanor makes it the perfect choice for families. These cats are almost dog like in their behavior, greeting family members at the door, following them through the house, and snuggling down beside them on the sofa. If you do not believe in de-clawing your cat, but are concerned about having your furniture ruined, you may want to consider this breed as well. Some Ragdoll owners say their cats have learned to use a scratching post instead of furniture arms to sharpen their claws much more quickly than their other cat breeds. Since these cats seem to make an effort to keep from scratching people, as well, they may be less prone to scratch furniture in the first place.

While this cat breed does not need the company of other pets and seems to prefer to spend time with family members over cats, it does not mind living with other cats. Perhaps this is because this breed is so much larger than other cats, but it is most likely because the Ragdoll is just so sweet natured.

Since the Ragdoll is a longhair cat, some prospective cat owners are a bit hesitant about choosing this breed. They are afraid they won’t have time for the frequent grooming most longhairs require. However, this breed’s silky coat texture makes it a very low care cat. Combing through your cat’s hair weekly to remove stray hairs or debris is all that is necessary to keep his coat looking fantastic. One thing you may want to keep in mind is that although most longhairs are prone to hairballs, these cats rarely develop them.

If you want a sweet tempered, family oriented cat, then the big Ragdoll may be the ideal breed for you.