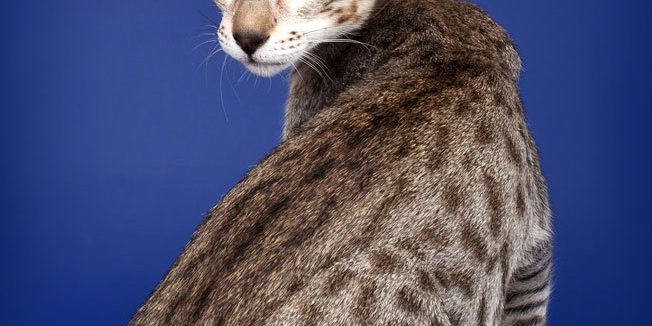 Do you love the temperament of the Siamese cat breed, but wish you could find a cat with a very different coat color? If so, the exuberantly affectionate Oriental is the perfect breed for you. These charming cats are closely related to the Siamese and are even considered to be Siamese by many cat associations. However, the Cat Fanciers Association considers these cats to be a distinct breed that just happens to be descended from the Siamese cat breed.

The Oriental was originally a shorthair breed, but longhairs are now available, as well. While the Oriental breed is said to have been founded in Great Britain in the nineteen fifties, Siamese with a wide range of colors have been around for hundreds of years. In the early nineteen hundreds, breeders decided they only wanted Siamese to come in the traditional point colors, and the color variations became much less common. In the nineteen fifties, there was a renewed interest in the colored Siamese, and British breeders began to call these cats Foreigns. However, American breeders called them Orientals, and British breeders decided to go with that name to make things a bit less confusing.

Like the Siamese, these cats have big ears, a triangular head, almond shaped, green eyes, a graceful, long body, and a long tail that tapers at the end. This breed weighs in at nine to fourteen pounds. You can find the lovely Oriental in Black, Havana, Cinnamon, Red, Blue, Lilac, Fawn, Cream, Caramel, Apricot, and Foreign White. This breed also comes in tortoiseshell, tabby, silver tabby, smoke, shaded, and tipped patterns of most of these striking colors.

If you like quiet cats, the Oriental may not be the best cat for you. Just like their relatives the Siamese, these cats are very vocal. They often will join in when their favorite people are having a conversation. However, if you don’t mind the vocalizations of these chatty cats, you will find that you have a very affectionate and loving pet.

The Oriental is devoted to his family and does not like to spend long hours alone. If you don’t spend much time at home, you should consider adding a second cat to the household to give your lonely cat some company. These cats do quite well in multiple cat households, since another cat gives them someone to play with. Of course, this active cat breed will get into twice as much mischief when there is another cat to plot and plan with.

If you aren’t fond of grooming cats, you should probably plan to own a shorthair Oriental, since these cats need very little grooming. However, the longhair still does not have extensive grooming needs, since these cats have silky, mid-length hair. Grooming your cat once a week should be sufficient, especially during the summer months, when the longhair sheds most of its coat.

If you want a cat with the personality of the Siamese cat, but wish the breed came in a different coat color, then the lovely Oriental may just be the perfect breed for you.