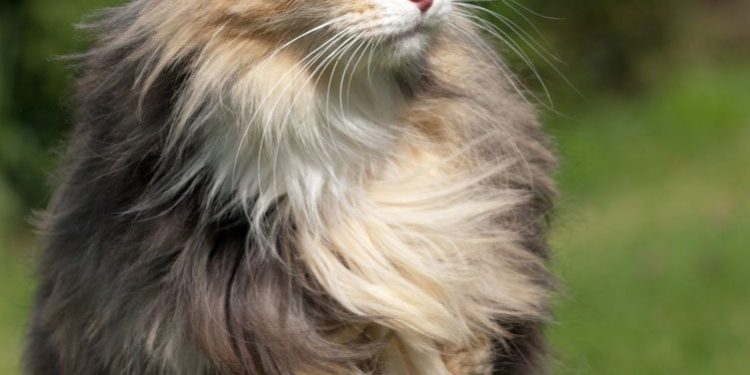 The thick coated Norwegian Forest Cat originated in chilly Norway during the early nineteen hundreds, but its ancestors accompanied the warlike Vikings as they sailed around the world. The cats kept their owners company, but they also had a more important purpose, rodent control. The Norwegian’s exceptional hunting ability enabled it to keep the Viking food supply mouse free during long voyages at sea and at home in the village. These big cats are often thought to be unfriendly and aloof by strangers, but are actually quite loving and affectionate with family members.

Norwegian Forest Cats are solidly built, with big bodies and long, powerful legs. Many cat fanciers say the Norwegian reminds them of the Lynx, a wild cat with a similar appearance. This breed’s graceful, furry tail is as long as its body and covered in long hair that gives it a graceful appearance. The head of this cat is triangular and its brilliant green eyes have a slight slant. Overall, the breed looks very alert, instead of having a traditional placid appearance. This breed comes in a wide range of colors, including white and black. You can find the Norwegian in self, tortoiseshell, smoke, tipped, tabby, and silver tabby patterns.

While the Norwegian Forest Cat’s thick, long coat looks beautiful, you should be prepared to do a bit of grooming to keep it that way. You will have to brush this cat’s coat out onces a week or your cat may end up with a matted and tangled coat that will need to be shaved off. Since clipping a cat can be quite stressful for him, try to keep his coat free of tangles.

If you are looking for a playful, active cat, that loves strangers, then the Norwegian Forest Cat is probably the wrong breed for you. These cats are fairly quiet and dignified and are very reserved with people they do not know well, although they will happily unbend to romp with their favorite people. While Norwegians aren’t energetic, silly cats, this breed can still make wonderful family pets. The Norwegian becomes very attached to his family and is very devoted and loving.

Since this breed is fairly self contained, the Norwegian Forest Cat is an ideal breed for busy professionals. His quiet nature makes him ideal for apartments or condos with thin walls, as he won’t disturb neighbors who don’t like cats. While this cat won’t usually quarrel with a second cat, he doesn’t actually need the companionship to keep him happy. As long as his owners give him a bit of attention in the morning and evening, feed him, and groom him, the Norwegian is quite content with his life. Of course, he won’t refuse extra companionship and attention, either.

So, if you want a cat with a warrior past and a gentle nature, then the Norwegian Forest Cat may just be the ideal breed for you. After all, if these beautiful cats were loved by the legendary Vikings, they have to be special.