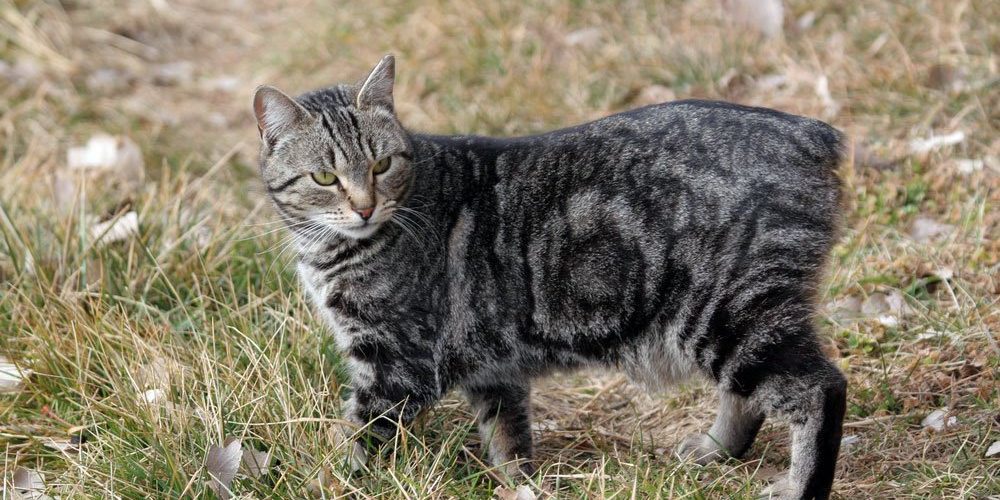 When you picture a cat in your mind, the animal probably has a long, gracefully tapering tail. However, one cat breed actually has no tail at all, the Manx cat. While tailless Manx cats are the only type of cat seen in the show ring, you can also find cats known as stumpies or tailies. These cats make wonderful pets, but are disqualified from the show ring because they are not tailless.

The Manx cat is a very historical breed that was first established before the seventeen hundreds on the Isle of Man. Because this cat has longer back legs than front legs, it walks with an unusual gait that many people say looks very much like a bunny hop. When these cats stand still, they hold their back legs bent so that their backs are still fairly straight. Despite its small, very rounded body, the Manx is still solidly built and the breed weighs in at a respectable eight to twelve pounds. This breed’s head is wide and slightly rounded, with prominent cheeks. This cat’s long ears are slightly rounded at the tips and its gold or amber eyes are very round. These unique cats comes in almost every color and pattern available, just like its close relative, the British Shorthair.

Although the Manx is a quiet, occasional placid cat breed, this cat still has a very sweet and playful nature. The gentle attitude of this breed makes it an ideal choice for families, but these cats are also a good choice for career oriented individuals who aren’t home for long periods of time. Although these cats don’t dislike other cats, they don’t need the company of cats to feel contented.

Children enjoy the playful nature of the Manx, which, despite its legs of different lengths, can leap higher than most other breeds. It is quite common for these cats to perch on top of doorways and refrigerators. Many people comment on the dog like traits of this breed. The Manx will actually bury or hide its favorite toys, just as a dog does. You can easily teach your cat to fetch, come when he is called, or other simple tricks.

If you live in an apartment and are concerned that a cat will disturb your neighbors, the quiet little Manx is an ideal choice. These cats can mewl, but usually choose not to.

This cat breed has both longhair and shorthair coats. The shorthair’s coat is fairly thick, but very little grooming is necessary. The longhair has a silky coat that requires very little grooming, as well. Simply brushing through your Manx’s coat once a week should be enough to keep him looking tidy. You should also accustom your cat to having his teeth brushed as a kitten, so you can control tartar and tooth decay as he ages.

If you want a quiet, playful cat with an unusual appearance, then the Manx just may be the ideal breed for you. After all, even if you can’t bear the thought of owning a tailless cat, the tailies have all the characteristics of their tailless siblings.