You are here:
Bird Breeds 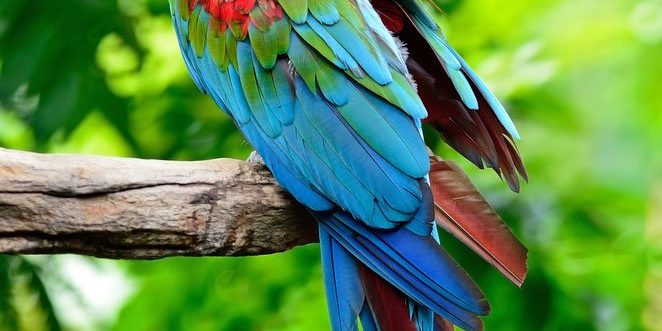 One of the biggest and brightest parrots is the macaw. The largest macaws are so big that their beaks are longer than a man’s hand. These vibrant, powerful birds are not a good choice for the beginning bird fancier. However, if you are a new bird owner and really want to own a macaw, there are some smaller varieties, such as the Hahn’s macaw, that are a good choice for less experienced bird lovers.

If someone asks you to describe a macaw, you probably think of the popular blue and gold. This striking bird has beautiful blue and yellow feathers and is surprisingly inexpensive compared to most other macaw varieties. The blue and gold is almost three feet (91 cm) long from head to tail.

While these birds are usually fairly laid back and gentle, they will often go through a nippy, moody stage in their adolescence. In addition, a mature blue and gold macaw that has gone to nest can be extremely dangerous. Birds that were once sweet and affectionate to their owners will not hesitate to attack and can literally bite right through a person’s hand. For this reason, people with young children may want to think twice about buying one of these large macaws.

Another macaw that is a popular pet is the Green Wing. This bird is actually one of the largest macaws and has vibrant green, blue and red coloring. Green Wings are known for their steady, gentle nature, but adolescent birds may go through a shy, nippy stage. You will need to be careful not to stress your bird with sudden changes during this time. If talking ability is important to you, you will want to choose a Green Wing, since this macaw is more likely to talk than other varieties.

The Scarlet macaw is probably the perfect pet for people who love colorful birds. This vibrant bird has bright red, yellow and blue feathers. However, despite its beauty, the Scarlet macaw is not a popular pet bird, because it is prone to being a nippy, moody parrot.

The Hyacinth macaw, the largest parrot in the world, is a beautiful blue bird with yellow accents. Mature birds are 42 inches (106 cm) long and are so powerful that they can literally take any bird cage that is welded together apart with their beaks. Despite its strength and size, this breathtaking macaw is quite good natured and would make an excellent pet. However, because this macaw is on the endangered list, a baby Hyacinth is a bit hard to find and quite expensive.

Finally, if you would love to own a macaw, but are concerned about owning such a large bird, you may want to consider one of the mini macaws. The Hahn’s macaw is a petite twelve inch (30 cm) bird with a mostly green body. There are some touches of red, blue and yellow color, but the Hahn’s is not very colorful. However, it is an intelligent, playful bird and acts much like the larger macaws do. Other mini macaws that are readily available as pets are the noble, severe and yellow collared macaws.