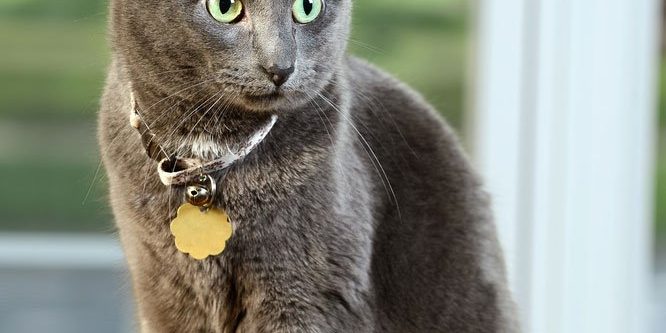 If you are at all superstitious, you may want to take a look at the Korat cat breed. This breed originated in Thailand well before the seventeen hundreds. The Thai people believed that the silvery blue color of this stunning breed stood for monetary wealth, while the brilliant green eyes of the breed symbolized abundant crops, since this was the same color of immature rice grains. It is no wonder that the Thai believed a newly married couple should receive a pair of Koret cats to ensure a successful marriage.

Today, hundreds of years later, the Korat is still a blue cat with unusually green eyes. While lilac cats are occasionally sighted in European countries, the lilac cats are not currently accepted by breed associations and are not likely to ever become accepted. After all, this breed has a strong tradition behind its spectacular silver blue color.

When you first see an adult Korat, you will probably focus on his enormous, round green eyes. These eyes are a very unusual shade of green, unique to the breed. Surprisingly enough, it can take up to four years for the striking green color to develop, as kittens are born with amber colored eyes. This breed is medium sized, weighing in at six to eleven pounds and has a stocky, compact body, a heart shaped face, and big ears. The cat’s medium length tail tapers gracefully at the tip.

While most cats have keen senses, the Korat is famous for its acute hearing, sight, and sense of smell. Of course, there are plenty of advantages to these heightened senses and this may be one of the reasons these cats seem to be so lucky. After all, it can be hard for predators to sneak up on a cat who seems to see and hear everything. However, there also are disadvantages. Korats do not care for noisy environments, since they have such good hearing. People planning to show their cats need to start accustoming them to the cat show world as kittens or they will not be able to handle all of the noise and confusion that comes along with a show.

People looking for an undemanding and quietly affectionate cat may not want to choose a Korat. These cats are known for their bossy, pushy attitudes. Your cat will demand affection when it suits him and ignore you if he doesn’t want to be bothered. Some people feel that this breed is similar to a grumbling, moody teenager. However, these guys are also very friendly and playful when they are in the proper mood. With these mood swings, the Korat is not the best choice for a family, especially if there are young children.

Since the Korat is so rare, it is not surprising that there are occasional health problems with the breed. If you decide to choose one of these cats, be sure to have your pet tested for neuromuscular problems. Luckily, the disorder is fairly uncommon, but it is best to rule it out immediately.

So, if you are willing to put up with a cat that has a slightly prima dona attitude because you believe it could bring you luck, then the Korat may be the perfect breed for you.