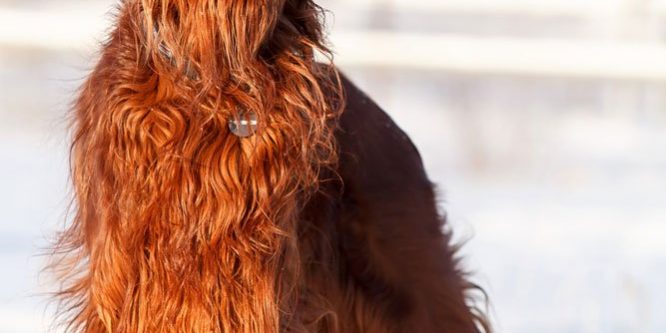 The Irish Setter is one of the most popular breeds of setters. This setter is elegant and beautiful. Irish Setters, which originated in Ireland, were bred primarily to work with hunters to hunt game birds.

The Irish Setter comes from several different breeds, including the Irish Water Spaniel, Spanish Pointers and the English and Gordon Setters. These dogs were carefully interbred to produce the stately look and demeanor of the modern Irish Setter.

This dog, which is classified as a member of the Sporting Dog Group, was first registered by the AKC in 1878. The Irish Setter is also known as the Red Setter. The spectacular coat of the Irish Setter is legendary for its rich deep chestnut or mahogany color.

In fact, because of its beauty, many breeders preferred the Irish Setter for its look rather than its hunting ability. So much attention was paid to increasing the beauty of the dog that it almost completely lost its hunting instincts. Today, some breeders are working to restore these instincts.

Apartment living is not recommended for the Irish Setter. The setter needs room to roam. A fenced large yard is the only way to contain this athletic breed, and even that doesn’t always keep your dog from roaming.

Irish Setters must get regular exercise to vent their energy. If not exercised enough, this breed will become rambunctious and bored. So get out with your Irish Setter and start walking (or, more accurately, running.)

The Irish setter is one of the most affectionate breeds and loves to be with people. This breed needs constant interaction with humans and does not like being left alone. Unfortunately, their large size and tremendous energy means that these dogs are often left in the yard for much, if not all, of the day.

To show you their displeasure, they will often chew up items and bark constantly. If you work all day or want a dog that will spend most of its time as an outside dog, then this is not the breed for you.

Training the Irish Setter is not always easy. The Irish Setter is an intelligent breed and most of these dogs have an exceptional memory. The breed will remember everything it is taught, both the good and the bad.

Early training is mandatory, because without training, the setter can be a very stubborn and willful animal. This dog is overflowing in enthusiasm and will quickly develop bad habits if left unchecked.

Grooming the Irish Setter is a pleasure. Many owners take pride in brushing and combing the silky coat regularly to keep it free of matting. You may want to have the coat professionally trimmed every few months. A professional dog groomer can keep the Irish Setter’s coat gleaming. Irish Setters shed quite a bit. Their hair will come off on everything they come in contact with.

If your dog romps in the woods, you should be prepared to do additional grooming to keep the coat free from burrs and tangles. You should also pay special attention to the coat when the dog is molting.

Irish Setters are fairly healthy dogs, but they are prone to several genetic disorders. Thyroid or epilepsy problems are common, as is bloat.

If you want a good natured dog with plenty of energy, then an Irish Setter may be the perfect choice for you. Just be prepared for some serious obedience work when your dog is a puppy, or you may be the one being walked when you take your full grown dog for a stroll.