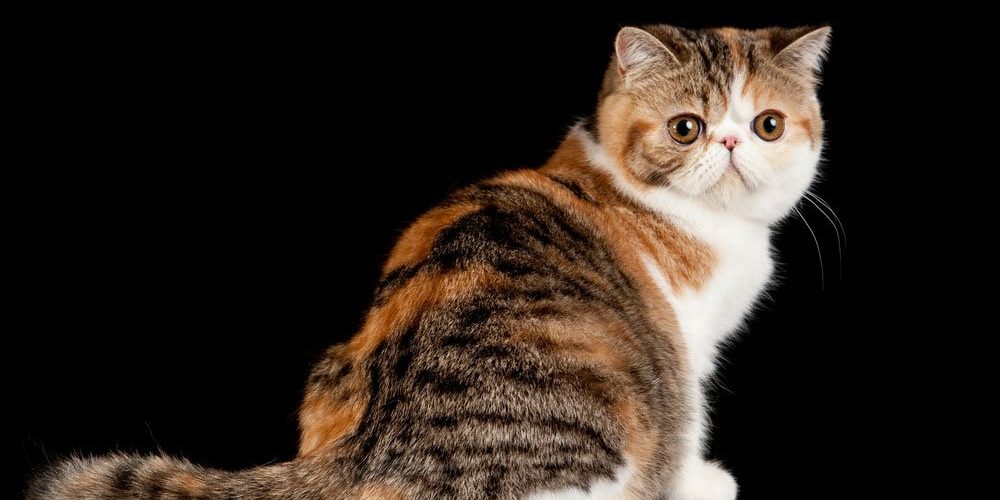 If you are a fan of the beautiful longhair Persian cat, but are concerned about being able to keep your cat’s coat from matting, you may want to consider the Exotic. This breed looks exactly like the Persian, except that it has a much shorter coat.

The Exotic weighs in at seven to fourteen pounds and has a stocky body, a round head, round paws, and a short tail. This breed comes in all colors and patterns, from solid Blues to Seal Points.

The Exotic was actually a happy accident, developed when American Shorthair fanciers tried to improve their breed’s coat by crossing Shorthairs with Persians. To their surprise, they ended up with cats that looked identical to the Persian breed, but with a much shorter coat, like that of a plushy teddy bear.

Persian fanciers who were unable to have a Persian because they just weren’t able to groom their cat every day were excited to see this exciting new cat that looked like a Persian, but only needed to be groomed once or twice a week. The breed quickly became known as the Exotic and fans of the breed say that it is basically a Persian for lazy people.
Although the Exotic was a cross between the American Shorthair and the Persian, this breed actually behaves much more like the Persian breed. This could be because the Exotic was outcrossed much more frequently with the Persian than the Shorthair in later years.

The Exotic is a quiet, gentle cat with a curious nature, just as the Persian is. However, this breed is a bit more active than the placid Persian. Since these cats are very laid back and easygoing, they are ideal familypets. After all, just because the Exotic doesn’t bounce off the walls doesn’t mean it isn’t a playful breed. Your cat will happily bat at a toy for hours on end. However, he will not become downright obnoxious in his quest for attention. In fact, many Exotics will just sit and look pleadingly at their owners until they receive the attention they are seeking. This breed does not crave the company of other cats, but will tolerate them.

Unfortunately, while the Exotic received the Persian’s wonderful temperament, this breed also received a few less wonderful traits. These cats have the same head shape as the Persian and have the same tendency to have health problems that are directly related to this head shape. Matter from weepy eyes, nasal problems, and teeth problems are common in this breed. Cat fanciers are trying to breed cats with faces that are slightly less flat and round to alleviate these problems.

So, if you are a fan of the Persian cat breed, but don’t have a few hours of free time each week to spend grooming your cat’s lush coat, you may want to take a close look at the Exotic cat breed. After all, with the Exotic breed’s similarity to the Persian, this is one occasion where you can definitely have your cake and eat it too.