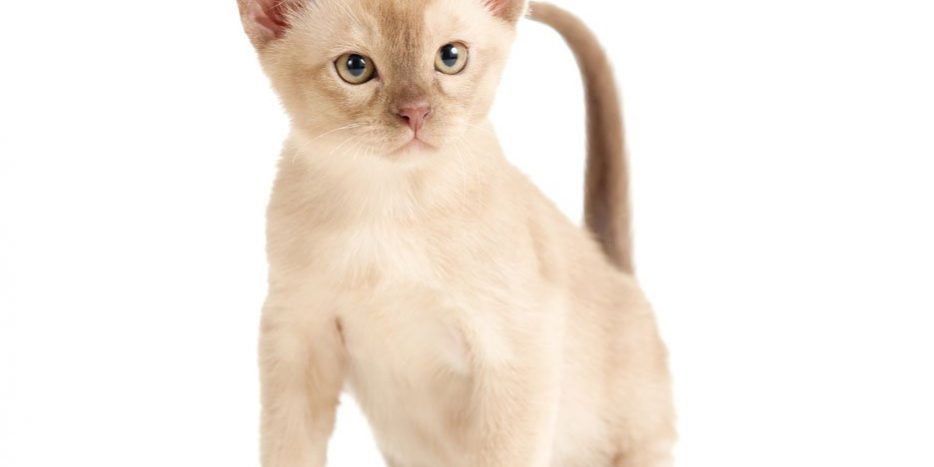 If you love the temperament of the American Burmese, but don’t care for the breed’s exaggeratedly round head, then you may want to take a close look at the European Burmese. This breed is actually descended from the American Burmese, which originated from temple cats in Burma. The temple cats were pure white, but suddenly changed color. According to legends, this color change happened when the cats took on the coloring of the temple’s goddess. However, cat fanciers have a more practical explanation. They think a wandering Siamese fathered a few litters of kittens. The American Burmese first arrived in Europe at the end of World War II.

European breeders were concerned that there was such a small gene pool to work with and decided to crossbreed the American Burmese with the Siamese cat. As they worked with the breed, they decided that they liked the Oriental appearance of these crossbreed kittens more than the appearance of the original American Burmese. As the breeders continued to work with the Burmese, they developed a cat that was distinct enough to have its own name, the European Burmese.

Besides developing a wedge shaped head instead of the round head of the American Burmese, the European Burmese developed several new and exciting colors. This breed comes in Brown, Chocolate, Red, Blue, Lilac, and Cream colors, as well as tortoiseshell patterns of these colors. Ideally, these cats should have large rounded eyes with a rich golden color, although green eyes are allowed. This breed has a powerful, well muscled body that weighs in at eight to fourteen pounds. Graceful, slender legs and and a nicely tapered tail balance the Burmese body.

These cats are extremely sweet and loving animals. They enjoy spending time with their families, but are not overly playful or mischievous, preferring to curl up in the nearest lap and doze. This breed is very tolerant of children and other pets. Since these cats crave companionship, they are not suitable for people who are away from home for long periods of time, unless they have another cat to keep them company. In fact, even if you hardly ever leave your cat alone, you may still want to add another cat or two to the household, since the European Burmese loves to spend time with other cats.

Since the Burmese is a shorthair breed, it doesn’t need a great deal of grooming. Simply brushing through your cat’s coat once a week should keep him looking sleek and beautiful. Occasionally, you may want to bathe him to keep dander down. In addition, you should check your cat’s nails to be sure they do not need trimmed once or twice a month. You may also want to brush his teeth to keep them from becoming dirty or decayed.

If you want to own more than one cat and have a household with children in it, then you may just want to consider the beautiful European Burmese. Best of all, despite the breed’s Siamese ancestry, it is not an overly vocal cat.