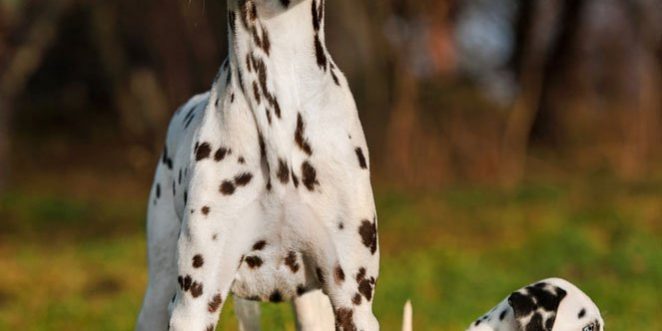 With the popularity of the Disney cartoons featuring Dalmations, it is no wonder that this breed is in demand. However, few Dalmations act like the dogs in these movies, although Dalmation puppies can certainly get into plenty of mischief, just as their cartoon counterparts can.

The Dalmation is a member of the American Kennel Club’s Non-Sporting group. These dogs first arrived in England during the 1700′s, where noblemen used them to guard their coaches. Dalmations were the ideal breed for this job, since they got along well with horses. In fact, Dalmations were so good with horses that they became popular with firemen, who used horse drawn fire wagons. By the time fire engines replaced the horse drawn wagons, Dalmations and fire stations were inseparable.

The Dalmation is a 45 to 65 pound dog that stands 19 to 24 inches in height. This dog is well muscled without being overly bulky or stocky. Its eyes can be brown, blue, or a combination of the two colors. The Dalmation’s long, graceful tail is extremely powerful. The sleek coat of this breed has a background of white that is covered with black or brown colored spots. As new born puppies, Dalmations have no spots. They are pure white until their spots begin to appear.

Dalmations are extremely high energy dogs and are prone to hyperactive behavior and separation anxiety. You will need to be prepared to take your dog jogging or for a run in the park to burn off energy, as he may not burn off enough energy walking in the yard by himself. If possible, give your Dalmation a job to do. Obviously, not everyone has a horse in the back yard, but you can always teach your dog to fetch the morning paper.

Inexperienced dog owners may not be able to handle this wonderful breed, as Dalmations have a tendency to be a bit hard headed. If you buy a Dalmation puppy, be prepared to attend puppy obedience classes. Also, socialize your puppy as frequently as possible, as Dalmations tend to be fearful around people they don’t know.

Since they are so active, Dalmations burn a lot of calories. You will need to feed your puppy a good puppy chow that has plenty of nutrition. Also, check with your veterinarian to see which vitamins and supplements you should give your dog. Also, ask about special diets that help reduce the chance of kidney or bladder stones, since this breed is prone to these problems. Dalmations are also prone to deafness, hip dysplasia and allergies.

Grooming a Dalmation is simple. Just brush your dog once a week to remove loose hair. If you don’t groom your dog, you will spend quite a lot of time cleaning up his hair, as Dalmations can be heavy shedders.

If you love the look of the Dalmation’s spotted coat and enjoy living an active lifestyle, then the Dalmation may just be the perfect breed for you.