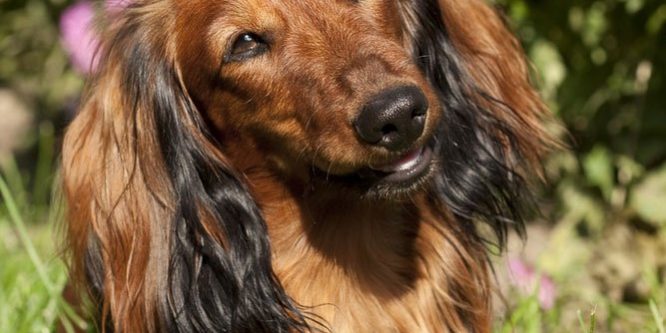 Dog owners love their dogs. But with Dachshunds that devotion reaches new heights. The reasons aren’t hard to understand. Dachshunds are special in many ways.

Translation from the German ‘badger dog’ shows just one of those ways. Bred in the early 1600s to hunt those ferocious little animals, the Dachshund became ferocious himself. That assertive and fearless attitude remains today.

That feisty nature can be a positive or negative.

Dogs that are independent can make great companions, since that also makes them playful and exploratory. It provides the dog with lots of energy and a willingness to try new things. It also means that training them requires extra patience and skill. The breed is more inclined than many to strive for alpha status in the household. Reminding them that the human is boss may require a long struggle.

But that training has to be appropriate to the breed’s mental and physical attributes.

Dachshunds weigh between 10-30 lbs and are 9 inches high at the shoulder. Toy varieties are quite a bit smaller, often under 8 lbs and only 5 inches high. Their lifespan is between 14-17 years, on average.

With their long bodies and short legs, Dachshunds are much more prone to spinal problems than other breeds. Rough handling can cause serious problems.

At the same time, because they are assertive, simply screaming won’t do the trick. At best that produces a fearful dog, at worst, they can become hostile and aggressive in response. They may look at their trainer as an enemy badger. Barking is more common in Doxies, too, so owners should be prepared.

With the right approach, though, they make for excellent pets and companions.

There are three basic varieties – Smooth-Coats, Wire-Coats and Long-Hairs. But the difference goes beyond the type of fur they sport. The personalities of the three types tend to follow a pattern, as well.

Smooth-haired Dachshunds more often attach themselves to a single family member. While they will tolerate other humans, they tend to be stand-offish and wary of other animals. The Wire-Haired is usually more playful and outgoing. Long-haired Doxies tend to be a little more placid. Though, like any Dachshund, they are up for a game of fetch whenever the opportunity exists.

Apart from spinal problems, Dachshunds less often suffer from diseases that are more prevalent in other breeds. Diabetes, abdominal cancers and other diseases are possible but much less common in Doxies. Urinary tract problems (such as stones) can occur, but they are more likely in special varieties such as Double Dapples and those with blue eyes. These types tend to have more eye and hearing problems, too.

Raising any dog is a challenge, if they are to be healthy and happy. But Dachshund owners commonly report that the rewards in their case are especially large. Dachshunds are highly affectionate and very loyal. The people who live with them tend to return the favor.