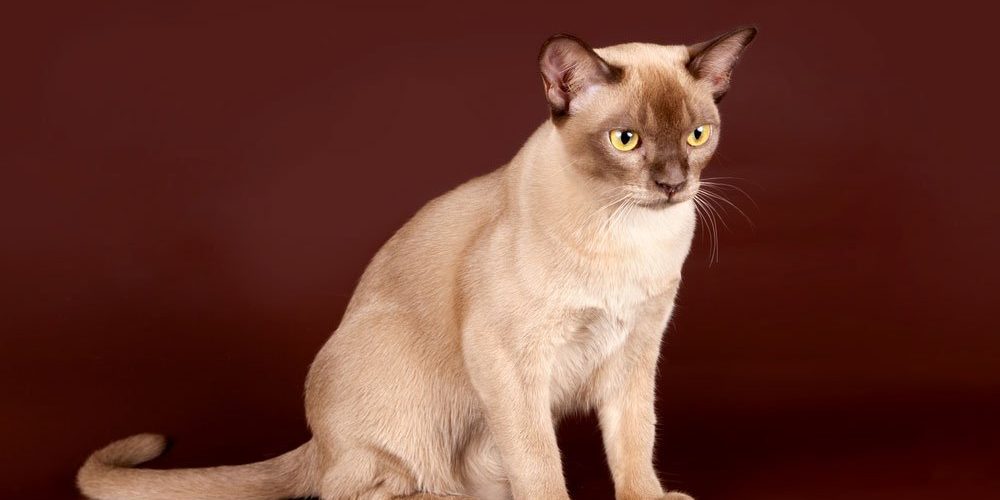 If you are a fan of the Oriental cat breeds, but want a quieter cat, you may want to consider the Burmese. These cats are not as talkative as the chatty Siamese, although they are actually closely related.

While the foundation cat for the Burmese breed was imported from Burma, this breed was actually created in the United States when this cat was bred to a Siamese cat and a kitten from her first litter was bred back to her. The Burmese cat breed actually has two distinct strains, the American Burmese and the European Burmese. These strains have become so different that some people now consider them to be two different breeds.

The American Burmese has an extremely round head and enormous round eyes. The tail is darker in color than the body. Although there are other colors as well, the Cat Fanciers Association prefers Sable, Champagne, Blue, and Platinum coat colors. The European Burmese has a more traditionally catlike wedge shaped head, although it does have the same large round eyes. The European Burmese comes in a wider range of colors than the American Burmese. Both breed strains weigh in at eight to fourteen pounds.

Unfortunately, for some time the American Burmese was bred to create an even rounder head and this breeding program caused some serious problems. A hereditary head deformity began appearing in these cats. Sometimes the deformity was so serious that the cats literally died. Other times, they had to be put down because they were in such bad shape. Today, breeders are concentrating a little less on the extremely round head and more on the health of the breed.

This breed is a very friendly and sociable one, so if you spend very little time at home, you may want to look for a different cat breed. If you still want to own a Burmese, you may want to consider buying two kittens instead, so that they can keep each other company while you are away.

The Burmese is happy in family environments. These cats are laid back enough that a bit of noise and activity doesn’t stress them out. They enjoy having plenty of attention and don’t mind a few visitors. While this breed is friendly, it is not as playful as some other Oriental cat breeds. If you think the Siamese is just a bit too outgoing and obnoxious, the Burmese temperament should be ideal.

Since this cat breed has a short, fine coat, you should not need to spend much time grooming your cat. Combing through his hair once a week should be enough to keep him looking glossy and healthy. In fact, you may just want to rub him down with a soft cloth or a grooming glove to pick up loose hair.

So, if you have always wanted to own one of the Oriental cat breeds, but think that the Siamese is too loud and active, then the graceful, sweet natured Burmese may be the perfect cat for you and your family.