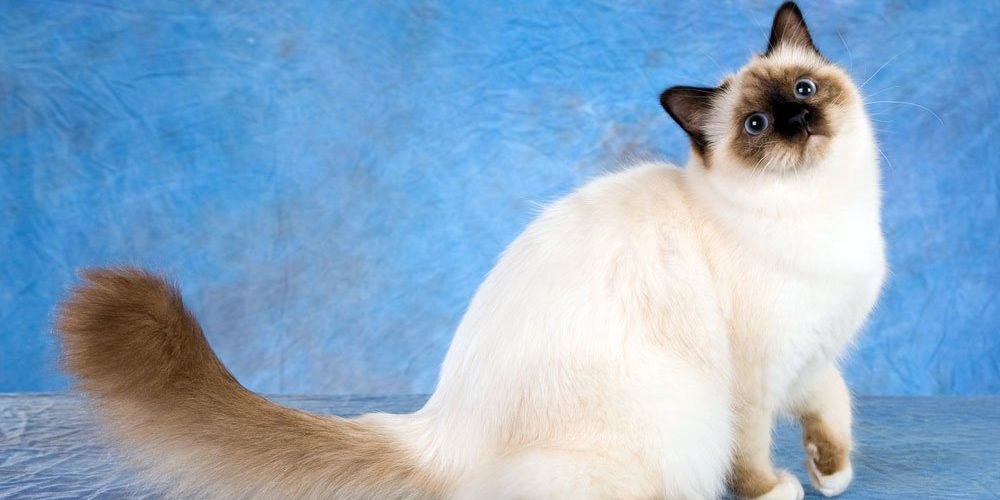 Do you want a cat that is considered to be a sacred animal? Many people think that the beautiful Birman cat breed originated from cats that guarded the Burman temples. This breed is even rumored to have helped the Burmese monks fight off attackers when a Birman’s coat turned the golden color of the goddess the monks worshiped, except for his paws which stayed pure white. Of course, less fanciful cat lovers say the Birman is simply a French relative of the Himalayan cat breed.

While no one is completely sure where the Birman breed came from, all cat fanciers agree that it is an older breed. Some breeders say the Birman is closely related to the Siamese cat, since it resembles a slightly stockier Siamese in appearance. In fact, more than one person has said that when the pure white Burman temple cats changed color, it was probably because a stray Siamese cat fathered a few litters of kittens.

In the nineteen twenties, the Birman cat reached Europe. A single female survived the long voyage from Burma to France and gave birth to a female kitten who is the ancestor of today’s Birman cats. This cat was most likely crossed with a Siamese cat. After World War II, the Birman was in grave danger of extinction, as only one known pair of Birmans had survived the German occupation. The breed was again outcrossed with another cat to avoid extinction, although this time the Persian was most likely used.

With all of the inbreeding that was done to save the Birman breed, it would be no surprise if these cats were prone to several hereditary diseases. However, the breed is surprisingly healthy overall. Just be aware that most of these cats are prone to anesthesia sensitivity and this problem, along with the fact that Birmans can be either A or B blood type, can cause trouble on the operating table. The breed is also prone to developing hairballs.

Since the Birman is prone to hairballs, you may want to feed your cat a diet that is formulated to aid in hairball prevention. If he becomes lethargic and does not eat as much as he normally does, you should consult your veterinarian about treating him for hairballs. Since this breed is not as active as some other breeds, you may also need to ask your veterinarian about feeding your cat a weight control diet if he becomes overweight.

While this breed is a longhair breed, it does not have a heavy coat. As long as you comb your Birman’s hair once a week, you should not have a problem with the coat matting.

If you are looking for a cat that isn’t quite as demanding and attention seeking as some of the more affectionate breeds, but also isn’t too standoffish, the Birman breed is a good choice. These cats are still somewhat playful, curious and affectionate, like their Siamese relatives, but are more laid back and relaxed than the Siamese, like their Persian relatives.