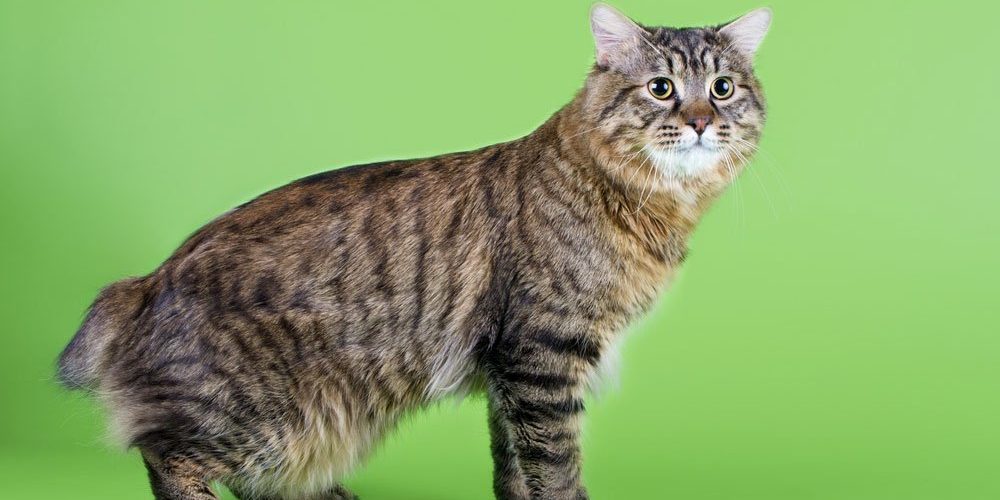 If you want a friendly cat and don’t mind that the breed you’ve chosen is a bit of an upstart in the cat world, since it only has existed since the nineteen sixties, you may want to consider the American Bobtail.

The American Bobtail is one of only three breeds in the Cat Fancier’s Association’s Provisional Class, which is where cat breeds are placed until they show that they are able to stay true to their standards. This breed is a lightweight compared to many other breeds, weighing in at seven to fifteen pounds.

While many cats have a sleek, slender appearance, the American Bobtail standard calls for a stocky, muscular cat with big paws and a slightly wild appearance. This cat’s head is wedge shaped, but broader than normal. The Bobtail breed can be a shorthair or a longhair, but even shorthair cats do not have smooth coats. The shorthair coat still is long enough to give the cat a bit of a shaggy look. While the Bobtail can come in any color, fawn and white, blue tabby, red tabby, and brown tabby are the most common colors. Shorthair cats are much more common than longhair cats, since the shorthair gene is actually dominant.

Since American Bobtails are very friendly and a bit nosy, they are prone to get into quite a bit of mischief if they are unsupervised and become bored. If you are away from home for long periods of time, you should be sure that there are plenty of toys available so that your cat can amuse himself and still keep out of trouble. Since this breed is fairly sociable, you may also want to add a second cat to the household to avoid having your cat feel too lonely.

The American Bobtail’s outgoing temperament makes this breed an ideal choice for families. If you socialize your kitten from a young age, he should actually look forward to having friends and family visit.

When the Bobtail was first developed, this breed had quite a few common health problems. However, in the late twentieth century, concerned devotees of the breed worked to rid it of most of these problems. Today, the American Bobtail is a strong, sturdy cat.

Since even the shorthair has a coat of some length, you will need to groom your cat at least once a week. Although the longhair coat does not tangle easily, you may need to groom your longhair Bobtail a bit more frequently. If you accustom your kitten to the grooming process when he is young, he will actually grow to enjoy the attention.

If you want to own a cat who is sweet and sociable, but still has an undomesticated streak, then the American Bobtail may just be the perfect breed for you.