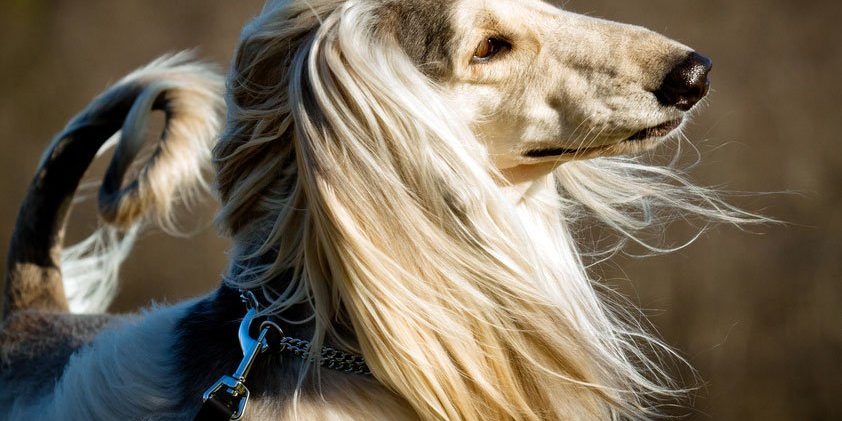 Are you a fan of royalty? The Afghan Hound, often called the king of the dog world, is known for its beauty and elegance.

The Afghan Hound has keen eyesight and was originally bred to hunt game as a sight hound. However, because of the nomadic life of the Afghan and Pakistan tribes that created the Afghan breed, it continued to evolve until it became a multi-purpose helper. The Afghan is one of the few dog breeds that can hunt game, herd sheep and protect its home with equal skill.

Today, this member of the American Kennel Club’s hound group excels in obedience, as well. The Afghan Hound weighs fifty to sixty pounds and stands between twenty four and twenty eight inches high.

These dogs have a long coat on the lower half of their bodies and a shorter coat on their chest and back. They are known for their elegant topknots.

This breed can come in any color or combination of colors, but white markings are considered unfavorable. The Afghan has long ears covered in sleek hair. This breed’s dark eyes have an Oriental appearance. Afghan Hounds are graceful and regal, but they are also powerful, energetic dogs, bred to endure rigorous conditions.

This breed needs quite a bit of exercise, so it is not ideal for an apartment. Be sure that you only exercise your dog in a fenced yard or on a lead. These dogs are much too fast for humans to catch them easily if they decide to run off. If you do allow your Afghan to romp in your yard, be sure that the fence is substantially high. The Afghan has the ability to soar easily over fences that would contain the average dog.

If you are looking for a pet that does well with small children, you may not want to choose an Afghan. These dogs are very attached to family and friends, so much that they do not adjust well to being placed in a new home once they are adults.

However, they are very independent and are not overly tolerant of rough handling and toddler games. Because of this independence, Afghan Hounds are occasionally hard to train. However, this breed is extremely intelligent and can really do well in obedience if it becomes interested in the training.

You may want to consider taking your dog to puppy obedience classes to learn the basics, but be sure you find a trainer that doesn’t believe in forcing obedience. Clicker training is a good choice for this breed.

When feeding Afghan Hounds, you should keep a few special considerations in mind. These dogs are prone to bloat, so if you are feeding a dry food diet, you should soak the food in water for five or ten minutes before you give it to your dog. You should also be sure you don’t let your dog out to run for at least an hour after he eats. Don’t allow him to guzzle water and always be sure the water is room temperature.

The Afghan is a fairly healthy breed overall. Besides bloat, this breed is prone to cancer and allergies. If your Afghan needs surgery or goes in for dental cleaning or grooming, be sure you remind your vet that this breed has problems with anesthesia.

Because of its thick, silky coat, the Afghan does need to be groomed regularly. Brush your dog’s coat thoroughly at least twice a week. You will need to clip its toenails once a month and should consider brushing its teeth daily.

If you want a dog that is dependent on you, then an Afghan Hound is not right for you and your family. However, if you don’t mind having a dog that is independent and likes to think for himself, then this may be the perfect choice for you.