The Afghan Hound – King of the Dog World 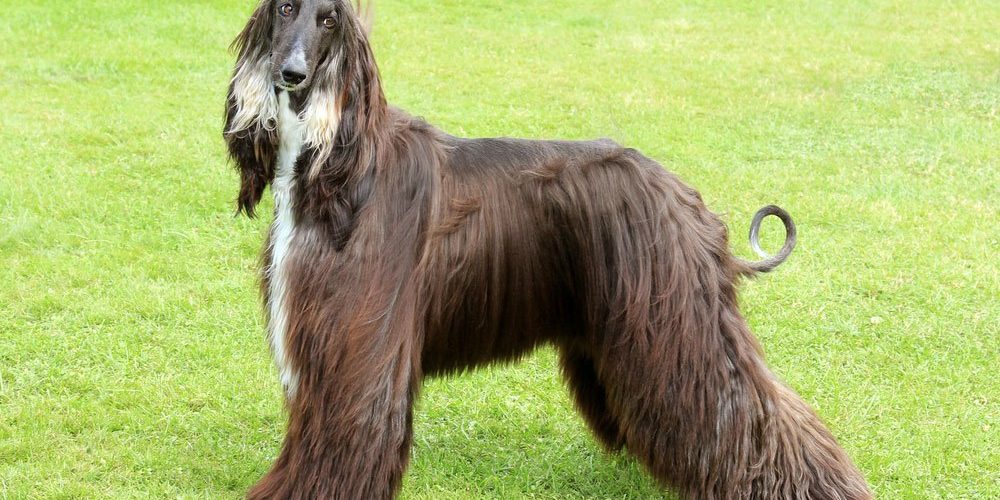 High atop a sandy summit, a pair of Afghan Hounds, panting from their arduous ascent, stand scanning the horizon. The relentless sun of an Afghanistan summer afternoon pours down upon them.

Suddenly, the Afghans see a gazelle headed toward a desert oasis for a drink. Instantly, they are coursing the sand after him, their legs stretched out in pursuit, nearly paralleling the sand. The male attacks from the front, the female from the rear, following the tactics of ancestral wolves… and suddenly the race has ended. The dogs have followed their master’s bidding, and for it they are lavishly rewarded.

King Of The Dog World

Powerful enough to tackle even a leopard, the Afghan Hound is not a dog to turn tail on danger. Perhaps this is one of the reasons why he is known as the king of the dog world. The Afghan’s stately attitude and magnificent carriage certainly seem to suggest royalty. Natives of Afghanistan hold the Afghan hound in high esteem, whereas ordinary dogs are considered unclean to them. Some of them even believe that Noah chose the Afghan Hound to represent the dog world on his ark.

Oddly enough, the Afghan Hound did not originate in Afghanistan at all, but began its history on the Sinai Peninsula, near Jebel Musa (Mt. Of Moses) – between the Gulf of Suez and the Gulf of Aqaba. This is the spot held sacred by Hebrews and Christians as the place where Jehovah delivered the Ten Commandment tables to Moses. A papyrus found in the Sinai, attributed the 3000 B.C., refers frequently to a “Cynocephalus” – freely translated by Major H. Blackstone as “Baboon or monkey-faced hound.”

A Favorite Among All Levels Of Society

The breed had been well accepted by both royalty and peasant.  Development of the breed progressed under the sheikhs and was probably pure for several thousand years. An Eastern type of Greyhound, the Afghan was undoubtedly selectively bred from the beginning.

In this manner he was eventually modified from the original Greyhound until he became a more useful – and therefore more valued – companion and hunter. Greyhound relatives of the Afghan Hound are the Saluki and Borzoi, breeds which were old when Babylon was still young.

Tombs in the Valley of the Nile depict the Afghan hound, and there is speculation that the animal may have been sent as a royal present to Memphis, or that he may have come with a sheikh and his party.

Actually, there is no archaeological evidence of how or when the breed eventually came the long 1000 miles to the hill country of North of Afghanistan, or why no trace of it is found in Arabia or Persia, across which it would have had to travel.  When the first European explorers entered the country, the Afghan was already there.

In the Northern province of Balkh, likenesses of the Afghan appear in caves; therefore, some refer to it as the Balkh Hound. Historian Jackson Stanford writes in a scientific paper that the Afghan Hound represents a form of animal structure found on earth over 100,000 years ago, and that based on bone structure comparisons, it is a contemporary of the earliest Asian dog-like animals of two million years ago.

In Egypt, where the Brahman bull and the cat were favored, the Afghan type dog came to play a significant part in the national religion. Legend says that it was the Afghan Hound that guided the goddess of motherhood and fertility, Isis, when she was searching for her husband Osiris, Kind of Egypt. The Afghan was afforded a highly esteemed position in Egypt from the first telling of the tale to the present day.

Afghanistan, A Land Of Extremes

Since Afghanistan is a land of extremes, the Afghan Hound has been forced to adjust to the searing heat of summer and the bitter cold of winter. His luxuriant coat protects him well. Pups are born without this fleecy coat, suggesting the breed’s origin in a warmer climate. The country’s deserts and abruptly in precipitous mountains – terrain requiring sure-footed steps. The Afghan Hound’s especially large feet and prominent hipbones allow for steady steps and dexterity of movement.

Some attention must be paid to the term “hound”. The Afghan is not a “tracking” hound like the basset, bloodhound, etc., which use their sense of smell to track their prey through the underbrush. Rather, he is a “coursing” hound, hunting in open country. The prey is not stalked, but overtaken by speed and endurance.

The Afghan’s long limbs and deep chest allow him to perform this task superbly. Gazelles, mountain deer and hares are his chief prey. Generally, Afghan Hounds hunt in pairs and sometimes with a hawk. The hawk flies around the eyes of the prey to confuse it, while the dogs attack.

Hunting was not the only reason the Afghan was useful to his masters. The dog would also guard the tent or caravan at night, protecting it against thieving raiders. His masters went so far as to teach him to steal from neighboring encampments.

In the middle ages, teams of dogs were used to pull carts of tea, fur and incense between Persia, India, Arabia, Russia and China. In India, the Afghan Hound is useful in tending flocks of sheep. Today, owners of the Afghan Hound have made use of his luxuriant fur by spinning it into yarn to be made into sweaters and coats.

When The Afghan Hound’s Popularity Grew

In Afghanistan, a northern and southern type of dog was recognized. But after the 1879-80 Afghan War, when the breed was introduced into England, the two types were interbred. The returning soldiers spoke highly of the Afghan Hounds which they had observed there. Around the turn of the century, Captain John Barff imported from Seistan one of the first prize Afghans in Europe.

Barff’s famous “Zardin” became a sensation in Britain and was asked to make a royal appearance before Queen Alexandra at Buckingham Palace. He won in the foreign dog class at British Crystal Palace in 1907 and went undefeated in 52 consecutive shows. Some of the first Afghans to be imported lacked the now common topknot, full coat and ringed tail; however, Zardin did possess these traits. Unfortunately, Zardin’s line was inexplicably erased from history.

In 1925, a striking, black-masked, true-red Afghan Hound began his show career. He was Ch. Sirdar of Ghanzi, owned by Mary Amps, founder of the Ghanzi Kennels. Sirdar is now considered father of the breed, and present standards are based upon him. He was one of the best-known sires in Europe and was originally brought from King Amanullah’s Royal Kennels in Afghanistan.

In 1925, the first British Afghan Hound club was formed by Miss Evelyn Denyer. The club champion status for the breed (eliminating the need for exhibitors to show their dogs in the foreign class).

The first Afghan Hound to attain championship status in England was Buckmal, a black-masked, wheat-colored beauty owned by Jean Manson of Bell-Murray Kennels. The event occurred in 1927. An heir of Sirdar, Ch. Badshah of Ainsdart was the first Afghan to win Best in Show in the United States.

By 1963 over 4500 Afghan Hounds had been registered in the studbook of the Kennel Club of England. The first black champion female was Netheroyd Turkman Camel Thorn. She was the dam of famous Ch. Turkuman Nissim’s Laurel, the black Afghan Hound specialty show in the United States after being exported. He then went on to win in the Westminster Kennel Club’s Hound Group in 1950.

In the United States, 15-25 percent of the Afghan hound breeding is founded on the Bell-Murray strain and 20-30 percent on the Mary Amp’s famous Ch. Sirdar of Ghanzi. The first United States registration of a litter bred in the country was made by Valley Farm Kennel’s in September, 1928. The dam’s parents came from Miss Manson’s breeding.

Early in the 1930′s, comedian Zeppo Marx imported two Afghan Hounds to appear in a movie. One of them, Asara of Ghanzi, eventually went to Shaw McKean, one of American’s first enthusiasts. Asara whelped more than 70 pups before her death, to help establish the breed in the U.S.

Another famous dog in the pedigree of many United States Afghan Hounds was Int. Ch. Rudiki of Pride’s Hill, owned by Marion Foster Florsheim. He was 15 times Best in Show winner, 27 times Best American Bred in Show, 40 times Best Hound and 77 times won Best of Breed – a remarkable record. He was a carbon copy of his grandsire, Ch. Sirdar of Ghanzi, and he sired over 200 puppies. His name appears in many of the better pedigrees. He died on Christmas Eve, 1947.

In 1954, Champion Taejon of Crown Crest won the Afghan Hound Club of America’s specialty show. This black-masked silver, owned by Mrs. Kay Finch of Corona del Mar, California, had 19 Best in Show awards, four specialty show wins, 49 hound group firsts and 72 Best of Breed wins before he was retired at the age of six. He was undefeated for 3 years in the breed at all-breed shows coast to coast.

An all-time winning record in the breed was set in the 1960′s by Ch. Crown Crest Mr. Universe. He was the black-masked golden who won three best in shows, four specialty shows and 100 hound group firsts.

At Westminster in 1957, the dog which caused every fancier nationwide to take notice was the Ch. Shirkhan of Grandeur. He was the Afghan who took honors over 2500 dogs in competition, and was the first Afghan to win this event. It was also the first time that a hound had gone to the top position at Westminster. Shirkhan was co-owned by Sunny Shay and Dorothy Chenade. After his win, the Afghan’s popularity increased greatly in this country.

Interestingly, his owner had originally sold him, since she still owned his sire, Ch. Blue Boy of Grandeur, and was planning to repeat the breeding. Sadly, Blue Boy was killed by a car while attempting to rescue a poodle caught under the wheels. Weeks after the incident, however, the couple who had bought him returned Shirkhan after deciding he could never win!

Since young Afghan pups have no long fur and undergo a complete change during their first year, it is important to know what traits to look for when selecting a puppy. The thicker the fur, the better.

The eyes and rims should be as dark as possible and should slant upward at their outer corners. Teeth should come directly together in a “level” bite – not a scissors bit – and the muzzle should be long.

Usually, the saddle, or coat, along the backbone appears when the pup is about one year of age. The characteristic topknot appears at about the same time. The tail should at least curve toward a ring. And having a bit of white color on the face is desirable.