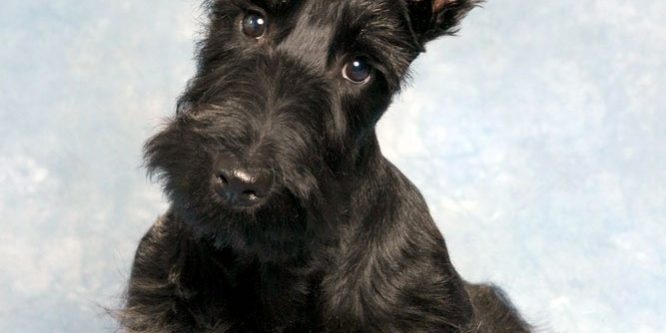 Although there is a bit of confusion concerning the background and origin of the Scottish Terrier, researchers do have conclusive documentation and information that shows this dog breed thriving back to the late 1800s.

What is the confusion about? For starters, we used to refer to all terrier-types that were from Scotland as “Scottish Terriers”. In addition, today’s official Scottish Terrier used to be grouped as a “Skye Terrier”. Whatever the origin may be, early Scottish Terriers were some of the hardest working hunting dogs alive. They would go in strong pursuit of their prey through any condition and terrain.

For some time they were referred to as “Aberdeen Terriers” because at one point they were mostly favored by the people of the Aberdeen area. This reference name only made a confusing situation worse. There were even people protesting the various names of this dog breed until finally a detailed description of what an authentic Scottish Terrier should look like was drawn up sometime around 1880. This was the first breed standard created for this dog.

Scottish Terriers first came to the United States in the year 1883. It gained popularity at a gradual pace until World War II. Then for some reason its popularity skyrocketed. The most popular Scottish Terrier was Franklin Roosevelt’s own dog named Fala.

Scottish Terrier dogs are extremely rugged and with a “tough-guy” personality.  How else could you describe a dog whose nickname is “Diehard”. Along with their bold exterior, these dogs are smart, inquisitive, and are always ready for action. Regardless of how big another dog or animal may be, Scottish Terriers can be fearless and quite aggressive when provoked. This attitude is quite the opposite when it comes to its family, of which the Scottish Terrier will remain loyal and protective.

Taking Care Of Your Scottish Terrier

This is one dog that must have plenty of action in its life. They love adventure and will need excitement through physical activities outdoors. Scottish Terriers can certainly live outside during the cold, as well as warm climates, but like all family dogs it is best suited to sleep inside with the rest of the family. Grooming requirements consist of about two to four thorough brushings every week. Further clipping and stripping may be necessary for coat fashion or dog shows.

The average lifespan of a healthy Scottish Terrier is between 11 and 14 years. The only major health concerns to worry about with these dogs are CMO and vWD. Minor issues that may show up are patellar luxation, Scotty cramp, and cerebellar abiotrophy.