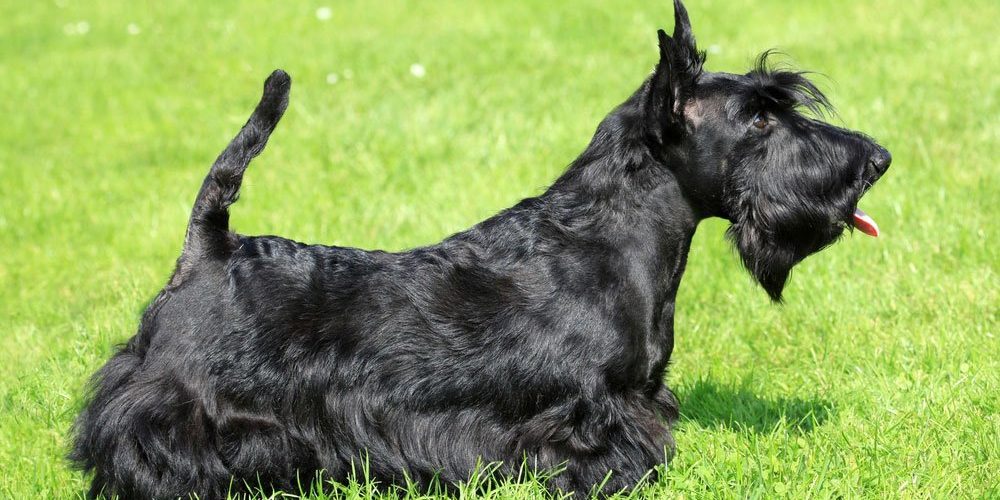 The Scottish Terrier isn’t the only native breed of its homeland, but it is probably the most recognizable. These stalwart descendants of Scotland are a favorite of so many for good reason.

They’re shorter than even the average short breed terrier, standing only about 10-11 inches (22-25 cm) high. But their proud stance makes them appear taller. The average Scottie weighs only between 19-23 lbs (8.6-10.5 kg), but it’s all muscle. The length from withers (between the shoulder blades) to the tail is typically about 11 inches.

The coat tends to be on the long side if left unclipped. Facial hair in particular can reach several inches off the muzzle, which can represent a problem for non-show dogs. Black dominates, but a few wheaten Scotties are around and brindle coloring (a mixture of black and tan) is not unknown.

Like all terriers, they’re very lively. But the Scottie outdoes many in his desire to romp and play. Developed in the early 18th century near Aberdeen, they were trained to hunt den animals like rabbit, fox and even badger. Though the practice is much less common today, they retain that fierce hunting instinct, where it comes out if they’re challenged.

That behavior can be seen clearly when playing tug, where even the most loyal family dog can become extremely competitive. It may be exhibited also during grooming. Most are not fond of having their nails clipped and will jerk when their feet are touched. A loud, piercing bark signals their desire for dominance and snapping is possible, too. But in calmer circumstances they’re very loving and become closely attached to one or two members of the family.

That focus makes them good watch dogs, but they will sometimes need to be restrained around strangers until they’ve had a chance to adjust. Biting is unlikely, but a healthy warning bark is common.

They’re very quick, surprisingly so for their size given their tiny legs. But they tend to be muscular and strong, a consequence of genetics that is reinforced by their active lifestyle. They rarely want to sit around very long and require lots of exercise to avoid becoming ‘problem children’.

That active nature is nowhere more evident than in their instinct to dig. An unsupervised Scottie can tear up a garden within a few minutes in its search for a gopher. Because of their small size, fencing them out is difficult. For maximum protection – for the garden, local rabbits and the Scottie – low, close-mesh fencing is best. But the yard is at risk, too, so supervision is always best.

Loving but strong-willed they require firm training, but will react negatively to any type of physical punishment. These are not dogs that will cower at the threat of a swat with a newspaper and that type of interaction is strongly discouraged. But because they can be so stubborn, patient training is a must or they’ll come to dominate the household.