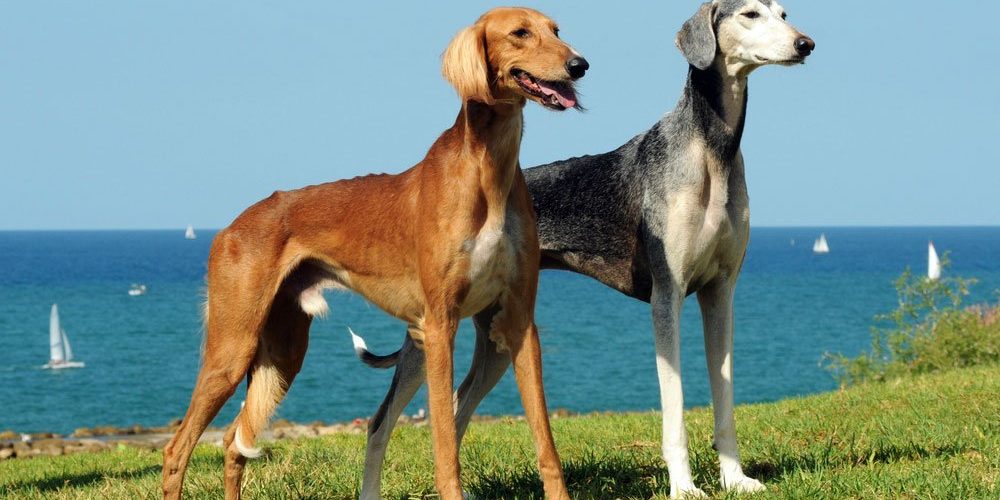 The Saluki is considered to be the most ancient of all dog breeds. There is evidence of their existence found in art work on Egyptian tombs that are dated thousands of years B.C. Arab nomads from the ancient civilization of Seleucia (where this breed got its name from) used the Saluki dogs to hunt animals in the desert such as fox, gazelles, and rabbits.

Ironically, most dogs are considered “unclean” in the Muslim world but the Saluki was considered the exception. The people of the land at that time referred to this dog breed as “el hor”, which means noble. These dogs were a precious provider of meat and so they were allowed to sleep inside the house-tents with other people and enjoy the attention and love from its Bedouin master.

The Saluki dog breed has been kept amazingly pure. This is largely due to the fact that Salukis were not allowed to breed with dogs outside of its race. This practice was adhered to for thousands of years. Variation of the breed started to emerge when Saluki dogs were widely distributed throughout the Middle East by many nomadic owners.

Saluki dogs were noticed by the Western world sometime during the year 1900. It did not take long for the breed to catch on with popularity. In fact, the Saluki  was officially recognized by the AKC in 1928.

The personality of the average Saluki dog would be described best as aloof and relaxed. They can be a bit reserved around strangers but are loyal and affectionate towards their owners. These dogs are great with children but may be too quiet and gentle for most kids to be entertained. In fact, many Saluki dogs quite shy.

Taking Care Of Your Saluki

Taking care of your Saluki dog requires daily exercise, preferably running in an open space outdoors. They love to sprint but if the outside is not safe for them to run around in, their physical requirements can be met with a nice brisk walk on the leash several times each day.

Saluki dogs can handle both hot and cold climates, and can even play outside in the snow. However, it’s best to keep this dog indoors at night with access to the outside during the daytime. Saluki dogs must have a warm soft bed to sleep in. They are naturally thin and could develop calluses if forced to sleep on a hard surface.

Many people who are not educated about the Saluki dog breed wrongly assume that they are sick or underfed because they look very skinny. Although it looks that way to someone seeing a Saluki for the first time, this assumption is false. They are naturally thin dogs that do not put on weight easily.

The average lifespan of a healthy Saluki dog is between 12 and 15 years. These animals are very healthy because of their pure blood line having been kept intact for centuries. Because of this practice, the only major health concern that tends to come up is hemangiosarcoma. The only minor issue is cardiomyopathy. Rarely seen is hypothyroidism.