You are here:
Dog House TrainingDogsTraining 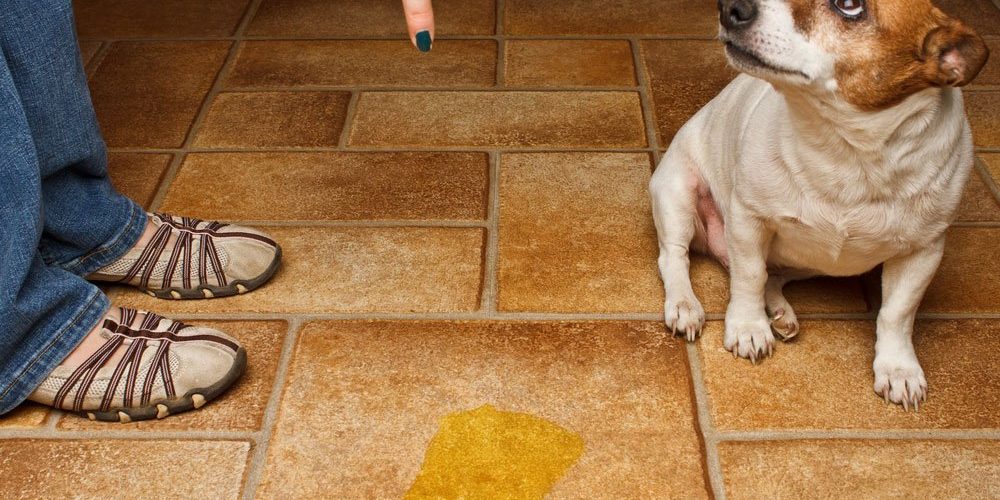 There is a certain element of surprise, perhaps even shock, when the owner of a perfectly trained and well-behaved adult dog suddenly steps in a puddle. “No, it can’t be!” He shrieks.

The possible alternative, such as a defrosting refrigerator, leaky water pipes, or a spilled cup of coffee give way to the awful truth; he actually sees the loyal household dog in the act of soiling inside the house.

The screaming and disbelief was followed by the slam of the back door as the old family pet is quickly banished out-of-doors like a nine-week old puppy that had just had an accident. Such harsh and fast action in such an instance can have serious and detrimental effects on the older dog. Whenever a completely housebroken dog starts urinating in the house, there is a medical or psychological cause involved.

The medical reasons will be covered first, since the majority of cases can be traced to that cause, rather than the psychological. It is important that the reasons for such behavior be pointed out and thoroughly checked before any retraining techniques are instituted.

Most dog owners know that the aging process of their dog will manifest itself in a gradual loss of hearing, followed by diminished vision. Squeezed somewhere in between, signs of arthritis might show up, decreased in appetite, more frequent naps, and other tell-tale signs which may become evident. What is not widely known is that toilet training is one of the first things to go!

Because this fact is not widely known and realized, it causes frustration and confusion to the dog owner who suddenly thinks that his dog has forgotten, is not as smart as previously thought, is lazy, or has turned into a sneak. Such behavior on the part of a perfectly housetrained dog could simply be the first signs of the inevitable aging process. In this aging process, the muscles of the bladder gradually lose their control.

In the male, the aging process can also cause the prostate gland to enlarge, and this will produce an inflammation which will cause him to urinate often. Kidney diseases occurs in about 76% of dogs over eight years of age. When a dog ages, there is a gradual degeneration of kidney tissue with a weakening of the kidney function.

The older dog should drink at least twice the amount of water than a younger dog since the older dog’s kidneys will require it. Naturally, this will involve more frequent urination, thus more trips to the bathroom.

Where the middle-aged dog would have required being let out in the morning and once at night, the aging process will require more freedom outdoors. In most cases, the older dog will try to make his needs known to his owner. However, the owner, who is used to a regular routine, just isn’t tuned in to the dog’s new requirement. Then, the old dog is left with just one alternative. It’s just as embarrassing to him as it may be to the owner.

In such cases, shaming and scolding will only make the situation worse, especially if the dog tried to communicate, only to have his communication fall on deaf or inattentive ears.