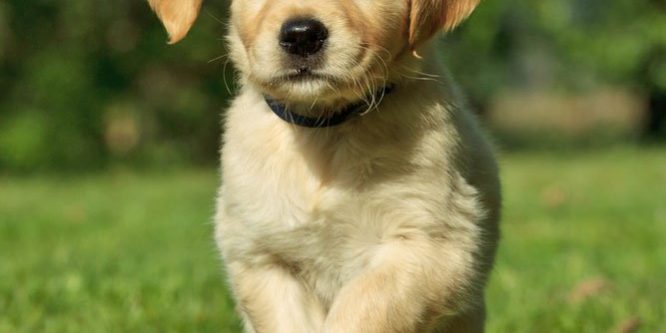 While learning the fetch game, it is important that tasty treats be used in place of too much praise, as previously mentioned. The importance of praise hasn’t been firmly written on the chalkboard of his mind – so until it is, give your pup what is known to be a positive reward stimulus – food!

(Some trainers might ask, “But shouldn’t training take place in the head, and not the stomach?” Yes that is true, but this is game time, remember?)

Try to get at least three fetching games (ten minutes each) into each day for three days in a row. These fetching drills should be in addition to a five or ten minute walk on the leash – daily. We’re going to sneak in two commands while the puppy is having these “game times” and before he even realizes what’s happened, he will have been trained to respond to “come” and “sit”.

During your retrieving games, when your puppy has returned the play toy to you, place your left hand on his rear end and your right underneath his chin. Press lightly with your left hand while exerting a small amount of upward pressure with your right as you command “sit”.

As soon as you have placed the puppy in that sitting position, pour on the enthusiastic praise, then toss the play toy out again. When the puppy returns with the toy, withhold any praise until you have commanded “sit” and have placed him in the sitting position. If the puppy should squirm from your grasp, and you fail to get him properly seated, do not throw the play toy, do not praise, and above all, do not give up!

Thoughts like “he just won’t do it,” or “he won’t let me,” have absolutely no place in dog training. Use the leash to bring the puppy back to you, say “sit” and place the puppy in the sitting position. Conclude each fetch-sit game with a tidbit reward.

By the time you finish your third session of fetch-sit games, you’ll notice that it really doesn’t take much left-hand pressure at all to get your puppy seated. You have a 10 minute walk on leash still scheduled for each of the days four through seven.  All things will be as they’ve been on preceding days, except – take four small tidbits with you.  Make sure they are tucked away in your pocket – out of sight and scent – as you take the puppy outdoors.

After you begin what with the puppy believes to be a routine daily outing (we know it to be an important part of his socialization training), take a tidbit out of your pocket, kneel down to his level and say his name, followed by the command “come.”

Using the leash, carefully pull the puppy towards you.  Give him the tidbit, and at the same time pour on the praise. By giving the tidbit with the praise, your puppy will begin to learn that praise is synonymous with the reward.