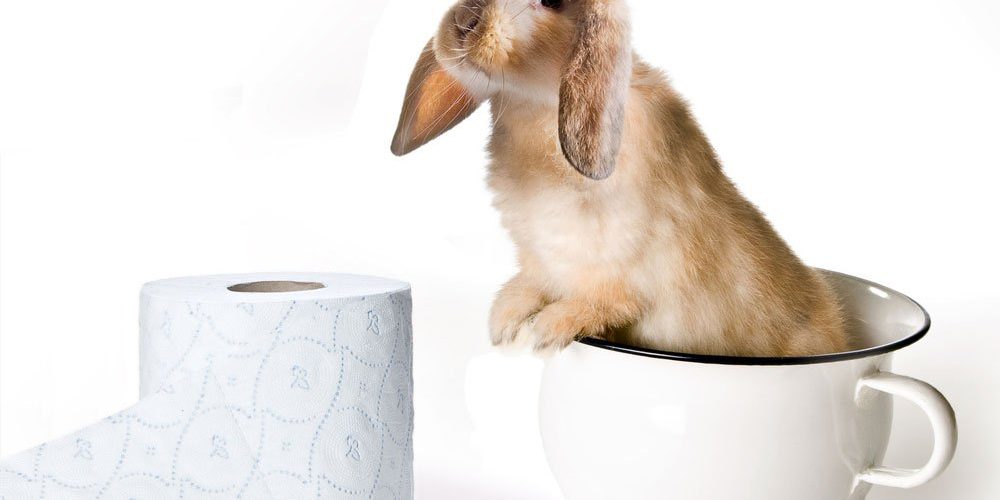 Since rabbit urine can have an overpowering smell, litter training is something most pet owners will want to do. Even feces, as unpleasant as they can be, aren’t as big a problem. They often can be cleaned up with no stain if the rabbit has an accident around the house while roaming free. But rabbit urine stain and odor is very hard to get out of carpets. Prevention is worth more than a pound of cure here.

Unfortunately, litter training a rabbit isn’t anywhere near as easy as it is in the case of a dog. But, with the right methods and materials, it can be done.

Start with the right gear. A normal cat litter box is big enough for most breeds. Some, though, can grow to 20 lbs or more. For them, a larger bin is helpful. But try not to oversize the litter box, rabbits are inclined to lay in the box. Don’t encourage them by making it large enough to do so comfortably.

Cat litter compound can be used in a pinch, but it’s generally best to buy material specifically designed for rabbits. Avoid making your own, such as out of cedar chips or pieces of clay unless you’re very skilled at producing the right material. Paper-based pellets work pretty well and rabbits are less inclined to eat them, though they will occasionally test them by chewing.

It’s equally important to have a cage large enough to allow the rabbit to stay off the litter box. Any enclosure that isn’t at least six times the area occupied by the rabbit apart from the litter box is too small.

The pan itself should be heavy enough to keep it from tipping when the rabbit gets in and out. Plastic containers are fine, but will need to be weighted or secured somehow. The litter itself isn’t heavy enough to solve the problem.

Litter training rabbits is straightforward, though it can take longer than with a dog who has very different instincts. Dogs, for example, will tend to defecate in the same spot, but move away from it when possible. Rabbits are either indifferent or actually eat one type of waste they produce. These are called cecotropes and actually provide needed nutrition for the rabbit.

Try to observe them to ensure they urinate and eliminate in the litter box before letting them out of the cage. If they’re free to go wherever they please, no habit of using the litter box is established. If the rabbit tends to eliminate in one spot, move the box to that area.

With careful observation, you may catch your rabbit as he or she prepares to eliminate. They often back up and lift their tail slightly. The next steps are tricky.

It’s important to move the rabbit to the litter box, in order to get them to associate the act with the place. But rabbits are much more timid creatures than puppies and can become stressed if they’re suddenly picked up and whisked far away. Be as gentle as possible and be prepared to possibly get stained.

With close attention and persistence it is possible to litter train a rabbit. Doing so will make your life much easier, and provide the rabbit with a secure place to go.