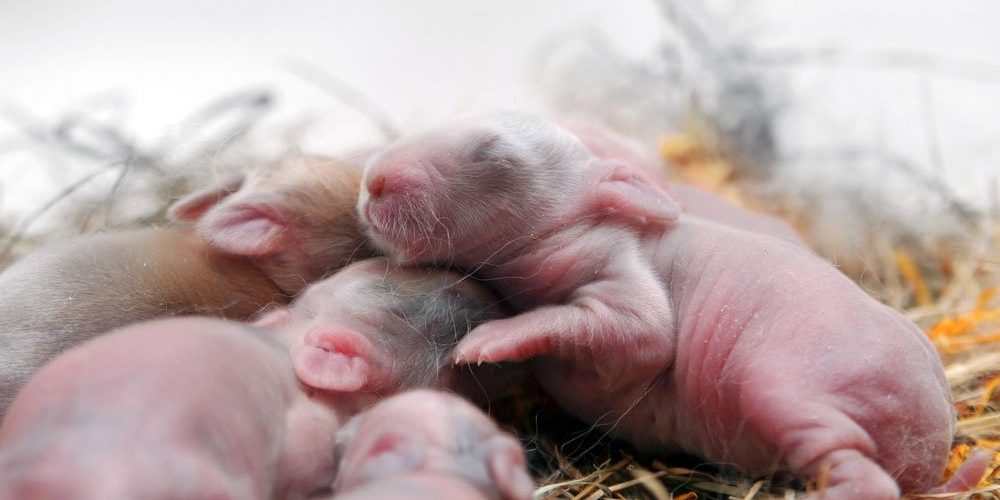 ‘They breed like rabbits’ is a familiar phrase. And it’s true. Rabbits are prolific. As prey for a wide variety of predators in the wild, the species survived, in part, by producing many offspring. But that ease and number can represent a problem for pet owners.

Breeding is best left to professionals or those who have experience. The breeding itself is simple, since (obviously) the rabbits are the major actors in the process. But the effort that surrounds the project is not small.

It requires increased cage space and maintenance, more food and feeding time, and other considerations. A pregnant female rabbit will consume about double the normal amount of food.

Above all, there’s the problem of what to do with the kits (the babies). Rabbits have litters of anywhere from 4-12 on average. Even at the lower end of the range, that’s a lot of animals to give away or sell. Any that are kept will also breed, leading to a runaway population explosion.

But for those determined to try their hand at rabbit breeding, there are relatively simple guidelines to follow.

Rabbits reach sexual maturity at about 6 months, some larger breeds later at around 9 months. Females have a vagina and males have a penis, like most mammals. But the male organ isn’t easy to see, since it’s tucked inside skin folds and to the untrained eye may resemble the female’s genitalia. At around 3 months, a male rabbit’s testicles will drop, making them visible to a careful observer.

When, after 6-9 months of age, breeding is desired the process is simple. Separate the male into a separate cage away from other males and females. Bring the female (a doe) to the cage of the male (a buck).

If carried out for a few days, pregnancy is almost guaranteed. Very few rabbits are infertile and females do not have an oestrus cycle. They don’t menstruate every six months like a dog or monthly like a human. They are ready to mate anytime of the year, one of the reasons that rabbits breed like, well, rabbits.

The gestation period is approximately a month and the female will need a nest, which it will make if it can. This is usually a soft mound, made of towels for example, that the rabbit will line with fur that it plucks from its body.

The female will feed the kits, just as a female cat or dog would feed its own young, from mammary glands that produce milk. The kits are blind for roughly 10 days until their eyes open, about the same length of time as a canine puppy.

The kits should not be held for a few weeks and once they reach that age can be fed as the doe and buck were with pellets, hay, vegetables and so forth.

Keep in mind that about 2/3 of female rabbits die of uterine cancer by age 5 if they have not been spayed. The younger they breed after maturity (say at around one year), the more likely they are to produce healthy offspring safely.