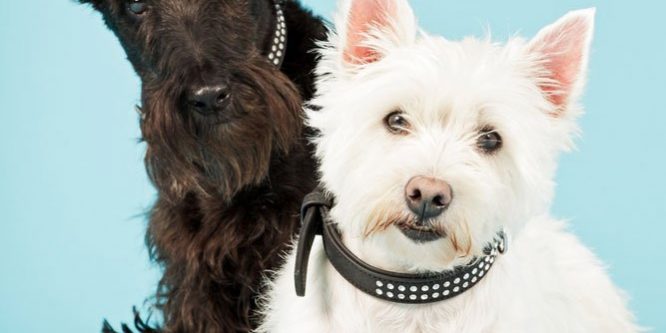 Saying you have a terrier doesn’t tell a bystander much. They’re among the broadest group of breeds around. They range everywhere from a tiny toy Yorkie to the huge Airedale, from the scrappy but small Westie to the sometimes sweet, sometimes ferocious American Pit Bull Terrier.

In between are a whole smorgasbord of breeds. Jack Russells remain a great favorite, thanks to their happy nature and endless energy. Cairns and Scotties retain their ranks near the top, thanks to a good dose of Scottish charm and their stellar good looks. Fox Terriers, whether Wire-Haired or Smooth, are another breed that captures the hearts of many, just as the famous Asta did decades ago in the Thin Man films.

Most of these breeds began over 200 years ago as working terriers, developed to hunt game, control rat populations or chase off varmints. The attributes that were selected for to produce the needed behavior – fearlessness, endless endurance, great strength in a small size and others – have sometimes come back to haunt modern owners. Terriers can be a trial.

Their temperament remains all these generations later. The sometimes stubborn, but always-ready-for-play attitude can make training a mixed endeavor. Terriers, even more so than the average, require great patience and persistence. The rewards are great, though. Terriers are extremely loyal. They bond well with their family or special person.

They do require a moderate amount of care, however. Long-haired, silky Yorkies need regular brushing. But they have no undercoat so shedding is minimal. The dense undercoat and rough fur of a Kerry Blue, similarly, will take regular clipping and good treatment to keep the dog in good condition.

Because they’re so competitive and high-energy, many terriers won’t take well to regular hair and nail grooming, either. More so than most breeds, it’s important to establish early in their lives that you are the alpha dog and will allow no rebellion.

To help with that task, modern dog owners are lucky in having an array of gear at their disposal. For some individual dogs a simple but sturdy collar and leash is enough. Many others will need, for their sake and yours, a strong chest halter and maybe even a muzzle.

Caring for them requires that form of security, but it also means taking great precautions with their diet. Some breeds have sensitive stomachs. The Boston Terrier is an example that demonstrates this more clearly than most. They’re not alone, though. More than one Yorkie has frustrated its owner by requiring considerable research to find just the right food.

Some terrier breeds are also more prone than others to certain diseases, such as cardiomyopathy and von Willebrand’s disease. On the whole, all dog diseases are relatively rare (today, at least, thankfully). But terriers come in for their share or perhaps a little more.

Still, despite all the challenges of housebreaking, training, grooming and diet owning a terrier is one of the most rewarding options for those seeking a dog. That is, at least according to those who should know best: their human companions.