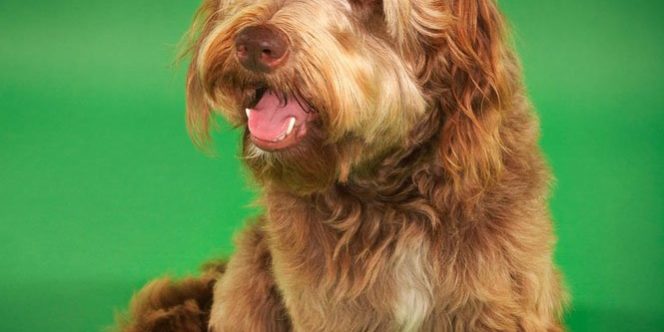 The Otterhound dog is a member of the scenthound family and its exact origin is unknown.  Some dog enthusiasts estimate that the breed may have started in France because it resembles a look of the old French Vendeen Hound. Still, others say that the Otterhound is a mix of the Bloodhound, Welsh Harrier, Southern Hound, and a touch of Water Spaniel.

Regardless of what its genetic makeup is, these dogs became very popular as hunters throughout England.  Therefore, many research materials and writings tend to associate the Otterhound as being from England.

The first documented groups of Otterhounds were kept by King John in the year 1212. During that time, the dogs were very useful in hunting down otters which were responsible for depleting fish throughout local streams. They would go after the otter within their den and then bay after finding it. Hunters would then release the dogs and send in small terriers to dispatch the otters.

The first Otterhounds to hit the United States came sometime during the beginning of the 20th century.  It did not take long for the AKC to recognize the breed shortly after. However, the Otterhound never did quite become a popular house pet or show dog. It is recorded as one of today’s rarest dog breeds from both the AKC and the English Kennel Club.

Otterhound dogs are packhounds, therefore they are very amiable with other dogs. Because of their genetic makeup as hunters, they love to pick up a scent and follow through with determination. The Otterhound loves to chase small animals when outside and unless thoroughly trained they may keep on the trail until out of sight. These dogs are very affectionate and great with children, but is not very responsive in terms of training.

Taking Care Of Your Otterhound

Taking care of your Otterhound will require daily exercise by brisk walks on the leash or better yet, running outside in a safe area. This dog can live well indoors but also handle cold and hot weather outside if need be. Grooming may take a bit of work due to the long hair that grows on the feet and mouth. These dogs tend to get very dirty when given the opportunity to roam outside.

The average lifespan of a healthy Otterhound is between 12 and 14 years.  Major health concerns include gastric torsion and CHD.  Minor issues that may spring up are CTP and elbow dysplasia. Occasionally you may see thrombopathy and epilepsy in the Otterhound but these health problems are extremely rare.