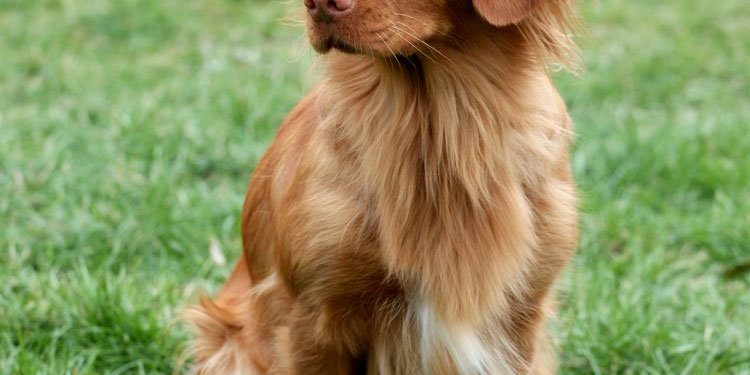 Many, if not most dog lovers and duck hunters will be surprised to learn that there is a breed of retriever with the unique ability to lure ducks right up to the hunter’s blind. This is not fiction, in fact these animals are the absolute best when it comes to duck hunting.

In addition to being an outstanding hunter, this sensible, affectionate, home-loving breed is gentle and good natured as are most retrievers. In addition to its unusual qualities as a hunting dog, this breed has, to an amazing degree, the ability to come home clean and gloss-coated after just a shake or a brief rubdown with a towel.

If you, like most of us, I’ve never heard of the Nova Scotia Duck Tolling Retriever, you will no doubt be intrigued by the name and what it signifies. “Tolling” is a colloquial term which means “to lure or entice to come nearer”.

It happens that most ducks are very curious creatures.  For example, foxes reportedly have learned to take advantage of this fact by creating just the right kind of distraction on shore to pique the curiosity of the ducks and cause them to gradually to approach the shoreline.

The ducks seem to become hypnotized, and once their gaze has become centered upon the object of their curiosity, they will scarcely notice other objects that are moving close by. Of course, one must create just the right distraction in order to successfully toll ducks. This is the special talent of this breed, affectionately known as the “Toller”.

How The Nova Scotia Duck Tolling Retriever Works Its Magic

When working a Toller, the hunter remains hidden in his blind until he sees a raft of ducks in the water offshore. He then sends his Toller onto the beach by throwing a stick or pebble.  The dog runs up and down the beach, silently searching, at the same time eagerly wagging his plum tail aloft.

It is this vigorous tail wagging that attracts the ducks to the water’s edge, giving the hunter his shot. The versatile Toller then brings the duck to his master’s hand.

The Origin Of The Nova Scotia Duck Tolling Retriever

The origin of the Nova Scotia Duck Tolling Retriever is obscure.  There are several versions, but all seem to agree that most of the development took place along the Little River, in Yarmouth Toller County, Nova Scotia. Hence its popular names: Little River Duck Dog, Yarmouth Toller, or more popularly now, the Toller.

One story is that a young teenager by the name of Andrew McGray was hunting waterfowl in 1882 and came across a Micmac Indian hiding in the brushes and throwing sticks toward the beach. His little fox-like dog dashed out to retrieve the sticks, tail wagging, and the fascinated ducks began to swim toward the shore.

When the ducks got within range, the Indian let go with his single barreled shotgun. McGray is said to have gotten the dog by barter from the Indian, who claimed it was a cross between a mixed female and a wild fox.

A second version is that a man named James Allen of Yarmouth obtained a female Flat Coated English Retriever from the captain of schooner and mated this with a Labrador Retriever.  Females from the resulting litter were bred to a brown Cocker Spaniel imported to Nova Scotia from Massachusetts. Later on, a cross with an Irish Setter was introduced to establish the present characteristics of the Toller.

A third version is that the Flat Coated Retriever was shipwrecked in February or March, and found its way to an island which was heavily infested with foxes. This event coincided with the breeding season of the foxes and, according to the story, the female produced a litter by a fox.

The next fall some fishermen noted the puppies on shore working in pairs, one enticing the ducks toward the shore by twitching its plume while the second lay in wait ready to pounce when the ducks came close enough. The fisherman caught these pups and brought them home.  Then, breeding from this stock, they developed the original Nova Scotia Duck Tolling Retrievers.

It is interesting to note that two of the versions involve the Toller as originating from the red fox.  It is apparently true that a male fox will mate with a dog if she comes in season in February or March. However, geneticists report no scientifically verified case of fertile hybrids from such a mating, and would no doubt take this theory with a grain of salt.

Hybrids between species so distantly related are not usually successful. In any case it is evident that the practical Nova Scotian hunter, wise in the ways of the red fox and tolling ducks, has bred the Nova Scotia Duck Tolling Retriever to be a master of the same craft.

What Does The Nova Scotia Duck Tolling Retriever Look Like?

The Toller is an attractive dog, small for a Retriever. Minimum weight at eighteen months is 50 pounds for a male and 35 pounds for a female.  The hair is fairly long, sleek and soft or silky, with a still softer undercoat.

The coat is straight except down the center of the back, where it is wavy. The color is red to fawn, slightly lighter than that of an Irish Setter. Most show some white on the chest, belly, toes, and top of the tail. The color throughout should be that of the red fox. The flesh colored nose is preferred. The tail is well feathered and carried aloft in action.

One Of The Easiest Breeds To Train & Handle

The Toller is docile, a non-roamer, and exceptionally intelligent – thus very easy to train. It is a born retriever, working eagerly over water, land or open ocean. When wet it has little or no odor, and dries quickly. It is very clean, mud and dirt coming off its coat as soon as it is dry, without bathing or brushing.

The Toller is by nature a timid dog, being startled by any strange noise, and thus makes an excellent watchdog. When working, however, its timidity changes to inquisitiveness, and the dog trembles with excitement, alertness, and determination. It moves quickly, with speed, and will continue moving regardless of any obstacles that come in its way.

Because of its keen intelligence, the Toller is a candidate for obedience training and field trials. Not much work has been done with Tollers and competition, because the dour Nova Scotian hunter has been more interested in his dog’s performance from a duck blind. However, some owners are now taking an interest in competitive sports and it is hoped that Tollers will soon be competing.

The Toller was first recognized as a type around 1910, and around 1930 they were being bred as purebred dogs. They were first registered by the Canadian Kennel Club in 1945 through the efforts of Col. Colwell, of Halifax.

Unfortunately, most of the registered dogs died during the following years and it was not until Eldon Pace of Subenacadie and Avery Nickerson of Yarmouth combined efforts in 1962 that several dogs were found in Nova Scotia with the necessary records on file. These dogs were registered with the Canadian Kennel Club and registered Tollers were again available in Nova Scotia.

However, the breed is by no means out of danger. There are only several kennels in Canada that are raising purebred Tollers and, although a few good Tollers are being bred in the United States, they were not approved by the American Kennel Club until June 11, 2001.