More about the the Shih Tzu 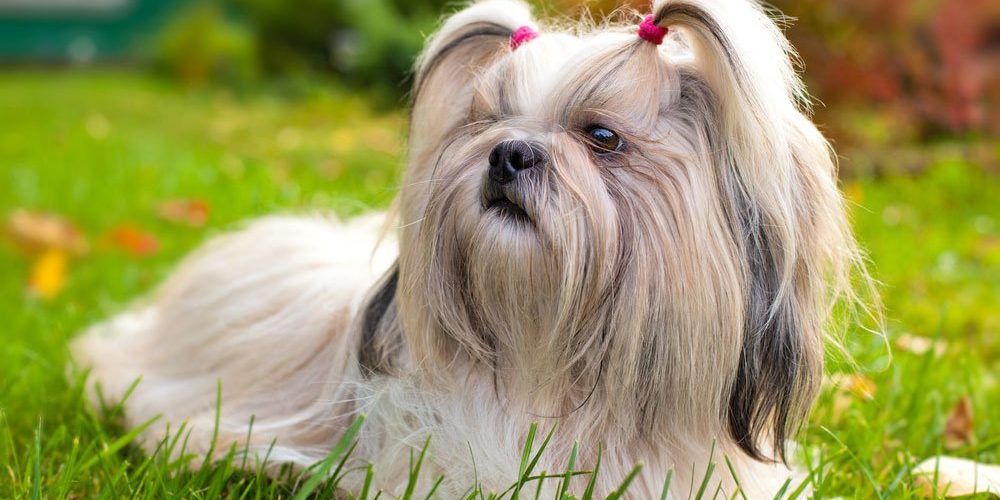 Through the centuries, when the earliest travelers and explorers were seeking new worlds, the dogs from the orient have caught the eye of dog enthusiasts all over the world and have ranked high on the canine popularity polls.

Since the late 1800′s, the Pekingese and the Chow Chow gained fame in Britain and Europe and paved the way for the rest of the oriental dogs such as the Lhasa Apso, Tibetan Spaniels and Terriers, and the formidable Akita. But none, perhaps, have had the rise to popularity as has the charming little Shih Tzu, which has won the hearts of show and pet owners the world over.

The Shih Tzu – pronounced sheed zoo, singular or plural – means Lion, and in their native land are referred to as the Shih Tzu Kou. “Kou” is the Chinese word for dog. The Shih Tzu originated in ancient Tibet where they were important in the palace life of the Dali Lama.

They came to china during the Manchu Dynasty as tributes from Tibet or as gifts from the Grand Lama to the Imperial Court in Peking. Their popularity, along with that of the Pekingese and the Chinese Pug, was well established by the turn of the century because of their fearless dispositions and their clownish antics.

Written records dating back to 1913 described their wide distribution in the Chinese capital, but it was the 1940s before they appeared in Britain in any great number.  A British couple living in China took a Shih Tzu named Wuffles back to England with them in the late 1940s, as they escaped the country just ahead of the advancing Red Army.

Wuffles was a camel-colored dog, bred in 1948, and fortunately sired a few litters before being killed by a truck in 1952. Another Shih Tzu left China before the Communist take-over; a black-and-white female named Mai-Ting. Mai-Ting was brought out from under a car seat by a chauffeur and presented to some children of the British Consulate.

She was a gift from a high-ranking Chinese family fleeing the city, who wished to place the little dog with a British family where she would be safe.  Special permission was required before she was allowed to leave Shanghai in April, 1949, but it was accomplished.

A Royal Navy vessel was sent to Shanghai to evacuate United Kingdom citizens to Hong Kong and Mai-Ting went right along with them just as her original owners had hoped. After reaching England, Mai-Ting was bred once to Wuffles and they produced a single black-and-white daughter in October, 1950.

Mai-Ting spent three years of her long life as a favorite pal at the British Embassy and Cyprus, and was 14 ½ years old when she died in August, 1962. Rumor had it that another female had left China in 1952, but no records are available since the order that no dogs were to leave the mainland was being strictly enforced.

The presumption that this was largely responsible for the breed becoming extinct in its homeland was born out of a written request dated July 1, 1966, from the Honorable Secretary of the Hong Kong Kennel Club, and published in an issue of the British magazine, Shih Tzu News, expressing interest in securing both pet and show stock for members of their club. Obviously their members could not locate Shih Tzu in Asia.

A very few scattered  Shih Tzu had reached Britain and Scandinavia and the preceding decade. Mrs. Kenrik Kauffman, wife of the Danish Minister to China, brought some to Oslo, Norway, when her husband was transferred to that country.  These were registered with the Norwegian kennel club.

Mrs. Kauffman first saw Shih Tzu in China when two were about to be burned alive as part of a funeral ceremony. She begged that their lives be saved and took them home with her. These two little dogs increased her interest in the breed and two others were acquired; one puppy from the Imperial Palace and one from Shanghai.

A puppy from these lines was presented to Queen Elizabeth, then the Duchess of York, in 1933.  Elizabeth named the puppy Choo-Choo, and he was used at stud in England. The King referred to the dog as “the hairy monster!” This association with the Royal Family did much to bring attention to the breed in Britain, especially after it had enjoyed a similar royal position in its own country as well.

The Paris-educated Princess Der Ling, first lady-in-waiting to the dowager Empress of China was also a breeder of Shih Tzu and had dozens of them. She and Empress both adored the little dogs and it was the Princess Der Ling who was largely responsible for the extensive breeding program carried on by the French Countess d’Anjou.

By 1933 Miss E.M. Hutchins exhibited a few Shih Tzu at the Cheltenham show in England. One, a black-and-white male, named Lung-Fu-Ssu had been imported from peking to Ireland in 1930 with General Sir Douglas and Lady Brownrigg, who were to become prominent Shih Tzu fanciers in the future.

A photograph of these dogs can be found in various dog breed books. It is a fascinating comparison with the breed as it appears today! Originally the Shih Tzu was shown in the Apso classes but in 1934, the Tibetan Breeds Association ruled that the dogs from China were not Apso, and the name Shih Tzu was selected for them by the then Chairman of the Kennel Club, Mr. Croxton Smith. On May 7, 1940 a separate register was granted to the breed and they were made eligible for championship certificates.

Paving Their Way For Success In The United States

It was September, 1969, when this was accomplished in the United States. Winner of the first Best in Show in the country, on this very first day of recognition, was Canadian Champion, and later American Champion, Chumulari Ying-Ying, owned by Rev. and Mrs. D. Allan Easton. The award was made by Judge James W. Trullinger at the New Brunswick Kennel Club show in New Jersey and set a record for the breed.

They have always presented the breed at its best in every possible way. Both by the written word, and by the magnificent presentation in the ring, the Easton’s Shih Tzu are largely responsible for the tremendous admiration for the breed they love so much.

Present day standards for the Shih Tzu acccept all colors, though in China the goldens or honey or camel-colored are the most prized.  Gold, or yellow, is the Imperial color so it is understandable that this color would be preferred. It is also the color of the lion – the beast after which they were named!

The 1938 Peking Kennel Club Standard for the breed states, “all colors permissible, a white blaze on the forehead and a white tip to the tail are highly prized.” Along with the mid-50s French standard we learn, “Honey-colored and white are rare and much appreciated.” The appreciation of the whites in China is highly questionable, however, since white is the color of mourning there and the Chinese do not like to be reminded of death.

It is believed that the Shih Tzu is descended from both the Lhasa and the Pekinese. This cross-breeding was designed to change the shape of the head to become more lion-like, to reduce the size of the Lhasa and improve coat in the Pekinese, and to introduce all colors to all the breeds. Sufficient breeding stock of quality is available today so that such cross-breeding is no longer necessary and, indeed, frowned upon!

The Amazing Temperament Of The Shih Tzu

Perhaps more than anything else in accounting for their tremendous popularity is the remarkable temperament of the Shih Tzu. They are completely attuned to active family living, either in the country or in the city. They make excellent guard dogs since they possess fearless personalities and bark only when there is good reason.

Grooming is a necessity, of course, as with any long-coated breed, but the end result of your labor results in a darling little face with a “palm tree” topknot, a constantly wagging silky tail at the other end, and beautiful silky hair in between!

The general appearance of the Shih Tzu maintains a personality that is lively, active and alert, with a somewhat arrogant demeanor. This is one dog that walks and acts as proud as its noble ancestry has produced it – head up and tail carried proudly over the back.

As evidence of their popularity, since their elevation in 1969 from the miscellaneous classes at the dog shows championship status, the breed has become one of the top toy dog contenders in the world. A favorite year of the Shih Tzu was in 1973, when Ch. Witch’s Wood Yum Yum, was not only top winning Shih Tzu in the nation for that year, but the top-winning toy dog, and placed tenth of all breeds.

A truly remarkable accomplishment for this wonderful little female owned by Dr. and Mrs. Wesley Edel of Charleston, South Carolina. Her record for the year was nineteen Bests in Show, fifty-five Toy Group firsts and twenty-nine additional group placements, a feat which also captured the Quaker Oats Award for having won more Toy Groups than any other toy dog in 1973.

Looking To The Future

There are those of us Shih Tzu fanciers who contend that the lovely little Shih Tzu will equal the popularity enjoyed for so many years by the poodle in this country. We further predict that it will probably happen within the next decade. We can only hope that the demand of the shift to will not result in excessive, indiscriminate breeding, but rather will excite interest in the further appreciation and enjoyment of it all over the world!