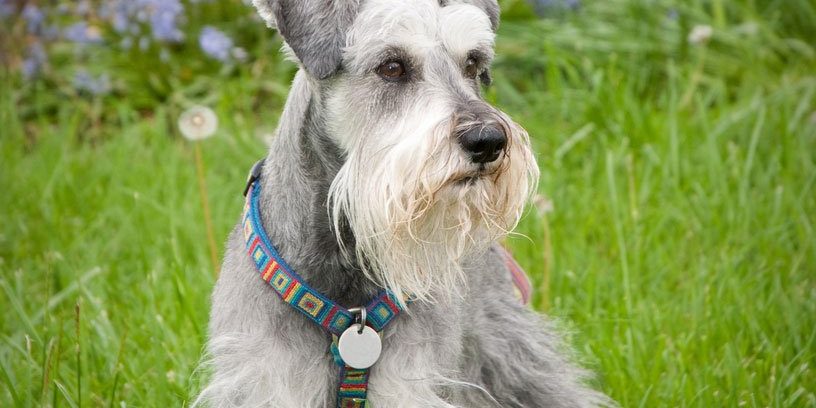 The Miniature Schnauzer is considered to be the most popular of the Schnauzer family dog breeds. This animal was created through breeding in Germany during the late 1800s. The mix came from the combination of the original Schnauzer and the Affenpinscher. By the year of 1899, the Miniature Schnauzer was exhibited as its own distinct breed from the standard.  However, it was only in the year of 1933 that the American kennel club finally separated the two versions into their own breeds.

Even though the standard Schnauzer was in the United States and recognized as a popular dog breed long before the miniature version came into existence, the miniature became more popular through the years and outpaced its larger version, especially after World War II was over.

The temperament of the Miniature Schnauzer is considered to be spunky, inquisitive, alert, and they make great companions. These animals love being around action and playtime just the same as they are well mannered in the house during calm moods. They are less domineering and not as aggressive as the standard Schnauzer when it comes to other people and strange dogs (or other pets). This is what makes the Miniature Schnauzer an excellent house pet that is both great with children and a fantastic watchdog.

Like all dogs, Miniature Schnauzers need plenty of exercise.  However, a nice long walk on the leash or a romp in the yard is plenty of physical movement for this dog each day. They are also best to live indoors with the family even though they could survive outside just fine. Emotionally, these animals need to be part of its “pack” at all times.

Grooming work for the Miniature Schnauzer will need to be in the form of heavy brushing at least once per week.  These dogs have a thick wiry coat that may need professional scissoring and clipping every two to three months.  This will help soften the texture of the coat.

Miniature Schnauzer dogs have a lifespan of up to 14 years when in good health.  Veterinarians recommend that all new owners of the Miniature Schnauzer have their pets DNA tested specifically for myotonia congenita, type A PRA, and vWD.

Major health concerns with this dog breed are known to be PRA and urolithiasis. Minor issues include the possibility of  myotonia congenita, vWD,  allergies, and Schnauzer comedo syndrome.