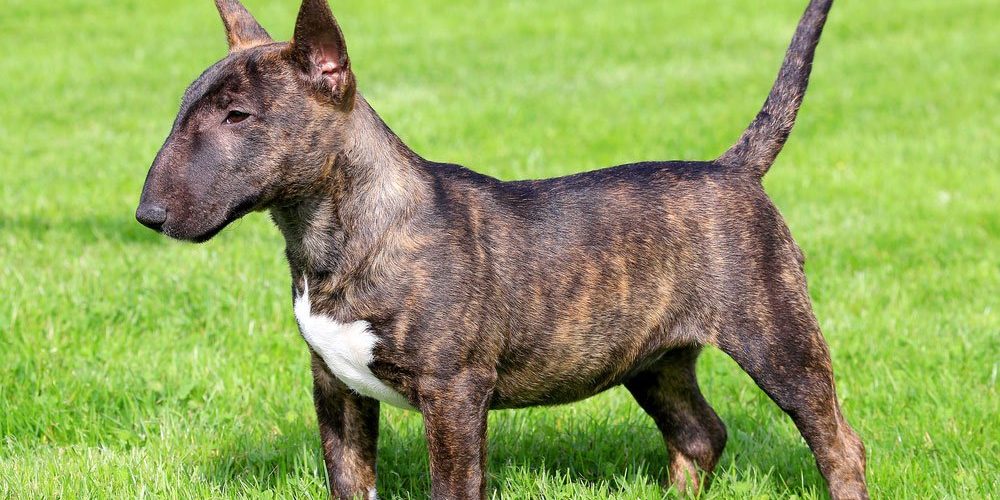 This dog breed was created directly from the regular sized Bull Terrier so it shares the same history in the early days. Back then, the standard drawn up for Bull Terriers allowed for all size ranges and poundages. This diversity reflected all of the breed’s ancestry, including the Black and Tan Terrier, Bulldog, and the White English Terrier.

Miniature Bull Terriers have been in existence for a long time. There have been some Bull Terriers reported to weigh as little as 4 pounds. One of the first groups of smaller “toy” Bull Terriers were white in color and referred to as “Coverwood Terriers”. This name was a reflection of the kennel that produce them.

In time, a better and more healthier group of small Bull Terriers were created.  Their size was somewhat larger than the toy version and so became known as “miniatures”. These Miniature Bull Terriers were bred and their popularity rose to such a point that the English Kennel Club recognized the breed in 1939.

This recognition created a few problems at first. Because it was its own separate breed, Miniature Bulls could not be interbred with the regular-sized Bull Terriers. Unfortunately, the numbers of miniatures were so small that inbreeding was forced to happen. The numbers rose slowly and in 1991 the Miniature Bull Terrier was recognized by the AKC.

Most miniature and toy dog breeds are considered lapdogs. However, the Miniature Bull Terrier does not have the same characteristics as these other small dogs. As far as personality is concerned, these dogs are literally just smaller versions of the standard-sized Bull Terrier. They are rough, playful, mischievous, yet sweet and friendly, all the same time. Miniature Bull Terriers are considered to be very stubborn but when trained properly become excellent watchdogs.

Miniature Bull Terriers should not live outdoors. Playtime in the yard and a few walks on a the leash will provide plenty of exercise for this dog. They also make excellent pets for small apartments or condominiums.

The average lifespan for a healthy Miniature Bull Terrier is between 11 and 15 years. The only major health concern that may show itself is deafness. This issue is mostly seen in the all-white color versions of the Miniature Bull Terrier. Minor issues include lens luxation and glaucoma. Kidney disease is sometimes seen with this breed, but is extremely rare.