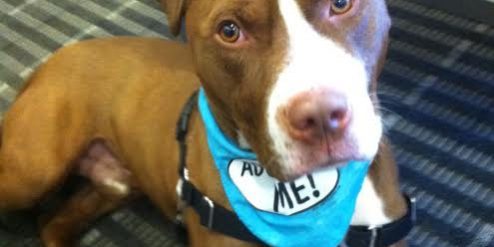 March 26, 2014- Reisterstown, MD – The homeless dogs of Baltimore Humane Society will be starring in Shakespeare’s Richard III this spring!  Premiering Wednesday, March 28th, The Baltimore Shakespeare Factory’s production of Richard III will include an adoptable canine as part of its acting troupe.

Jazz is the first of the adoptable canines who will be co-starring in the play taking the role of young Richard’s pet dog.  The canine thespian is a year and a half old pit bull terrier mix known at the shelter as “quite the gentleman.”  He loves attention and a good cuddle so he’s predicted to be a great team player and a popular favorite with the Shakespeare Factory.

The Shakespeare Factory is committed to helping both Jazz and all the homeless animals at Baltimore Humane Society.  It is doing all it can to get them adopted including a full page actor’s bio in the playbill and maintaining a B’more Humane information table at all the shows.

Baltimore Humane Society will be sharing the stage with The Shakespeare Factory throughout the rest of the year for several different plays.  Different dogs and/or cats will be appearing in the roles at each of the performances.

Richard III will be performed beginning March 28th at The Great Hall Theatre, 3900 Roland Avenue, Baltimore.  Catch the show for a free preview on Thursday, March 27th at 7:30pm.  There is also a press review on the evening of March 26th.  The show runs through April 19th.

For more information or tickets visit theshakespearefactory.com or call 410-921-WILL(9455).  Anyone who sees Jazz or any of the other Baltimore Humane Society actors will get half off the adoption fee if they come to adopt the actor and mention it when they fill out an application.

About the Baltimore Humane Society

The Baltimore Humane Society, founded in 1927 by Mrs. Elsie Seeger Barton, is an independent, non-profit, no-kill animal shelter, which offers low-cost veterinary care to the public, and a pet cemetery with grief support services.  We receive no operational funding from the local or federal governments, or any national animal welfare organizations.  For more information about BHS, and how you can contribute, volunteer, adopt, or foster, please visit www.bmorehumane.org or call 410-833-8848.