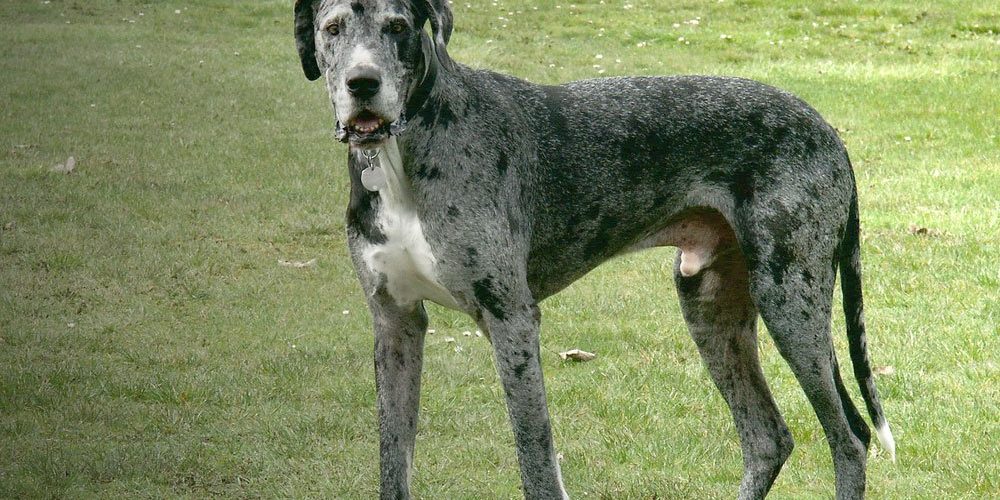 Always an amazing sight to see, the Great Dane is a very large dog that is said to be the result of the Greyhound and the ancient Molossus war dog. These ancestors helped the Great Dane to be a fearless hunter of big game. By the 14th century, these dogs were widely known for their agility and strength to hunt down wild boar. They proved to have the speed, courage, strength, and stamina to take down these tough, large animals.

Eventually the Great Dane became very popular with the landed gentry because of their hunting ability, combined with its graceful, yet intimidating appearance. These were noble dogs that made the perfect addition to any upper-class family.

The early name for this dog was actually referred to as “German Boarhounds” by the local British people. When and why the name Great Dane came to define these dogs is unknown and remains a mystery.

Interestingly enough, you would assume that it’s homeland would be with the Danish because of its name.  However, it is actually a German breed which, in 1880, the German authorities tried to officially claimed its name as the Deutsche Dogge. However, this name did not stick and by the time these dogs arrived in America during the late 1800s, the name “Great Dane”  has been the official name ever since.

The temperament of the Great Dane is a combination of dependability, friendliness, and courage. They are generally very friendly towards other household pets, humans, and even children. However, with small kids this dog is typically a bit intimidating. As with any dog, the Great Dane should be supervised when around your young ones.

Taking Care Of Your Great Dane

Upkeep for the Great Dane does not take much; daily moderate exercise in the form of a brisk walk two to three times per day is adequate. Many people assume that because of its large sturdy appearance, Great Danes can live outdoors.  But the truth is that it is not suited for outdoor living at all.  The best thing to do is to split the dog’s time up between staying outside during the day and inside at night. Care for its coat is minimal, requiring only the occasional brushing. Also, many Great Danes tend to drool often.

Great Danes are generally very healthy with minimal health issues that show up.  Major health problems often seen are osteosarcoma, gastric portion, and cardiomyopathy. Minor issues include OCD, hypothyroidism, CHD, HOD, and Wobbler’s syndrome (known as CVI). Because of its large size, the lifespan of the average Great Dane is between 7 and 10 years.