Golden Retrievers – Vaccinations, Worth The Risk? 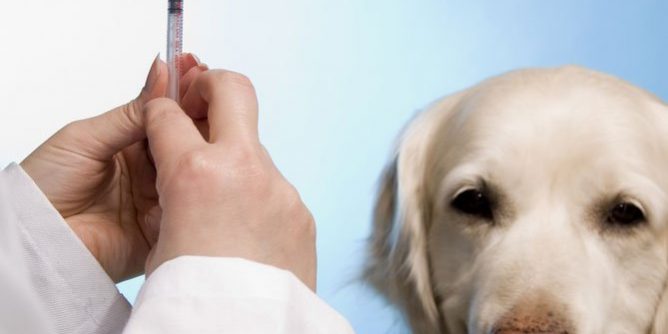 Like much else today, whether to give your dog vaccinations is a matter of some controversy. Getting objective information is difficult because there are so many advocates on both sides of the question. Some even sound reasonable. Those who might be concerned about the issue will want to do their own research to get as clear a view as possible.

What is indisputable is that prior to the development of vaccines, many Golden Retrievers and other breeds died of infectious diseases. After their development and widespread use, deaths due to viruses were reduced.

The controversy is less over whether or not to vaccinate, but when, how often and with what.

Puppies have immature immune systems, but not entirely so. During gestation they receive a blood supply from the mother that helps them fight disease. That process is continued and strengthened as they receive the mother’s milk. But that maternal contribution is temporary.

By about 5 months of age, the antibodies supplied by the mother have completely faded. At this stage, they are vulnerable to harmful (and potentially fatal) viruses. There’s no guarantee they will come into contact with any of them, of course. But the consequences are so severe that most people opt to get vaccinations for their Golden.

Those shots typically start at about 6-8 weeks of age, as the maternal antibodies start to wane. Through the injection of live or killed viruses, the puppy generates a response by producing its own antibodies.

Which is the better type of vaccine, live or killed virus, is an area of ongoing research. Live viruses stimulate a greater response, but represent a greater risk of inducing the disease the vaccine is designed to protect against. Killed vaccines are safer, but they stimulate a lesser response in the pup and therefore may create the need for more (or more frequent) shots to gain the same effect.

Most vets today will use killed or modified virus-based vaccines, since they’re safer. The shots continue every month or two (every vet has a slightly different recommendation) for about four more months. Then, the recommendations become more divided. Some advocate continuing yearly, others say that’s unnecessary. The science is still uncertain.

There are several common viral diseases that vaccines are used to combat, and some of the vaccines are ‘combos’ that are designed to guard against more than one. Parvovirus and Leptospirosis are two of the most common. Bordetella, an organism that causes ‘kennel cough’ is about equally common, as is distemper and corona.

Most vets will recommend vaccinations for these and, provided a quality vaccine is used, the shots are safe and effective. Some side effects do occur in Goldens and precautions should be taken to react quickly to them.

Facial swelling within half an hour after the shot is received occurs in some and treatment with Benadryl should be immediate. That swelling is a sign of a problem, and a potentially very serious one. In extreme cases, anaphylaxis (producing breathing difficulties, possible vomiting and other consequences) is possible. In any case, be prepared to see your vet instantly when symptoms are observed.

Rabies vaccines are possibly the most controversial. Though it’s very rare these days for a dog to get rabies, because of past experience and the seriousness of the disease (both for pet and human) most states require the shots. Shots are typically required at six months, then every two to three years thereafter.

After the first year or two of vaccinations, current research suggests that the effectiveness and/or need of vaccines is considerably reduced. The dog’s immune system builds up antibodies which remain in the system for several years.

How many years is still a matter of research, but 6-10 is not uncommon, according to some studies. Since the higher figure is at the low end of the Golden Retriever’s lifespan, shots later in life is probably unwarranted.

Ongoing studies may give a definitive answer to the value versus potential of vaccines within the next several years. Until the issue is settled, only your vet can advise you properly. Only you can weigh the risks and benefits.