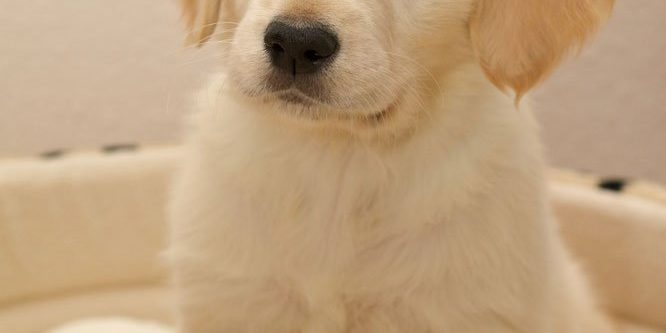 Housebreaking is something anyone will want to do no matter the breed of dog they own. Fortunately for the human companions of Golden Retrievers, that’s a much easier task with these intelligent, eager to please pups.

Beginning as early as four weeks for some, but certainly no later than eight weeks of age, Golden Retriever pups have the mental capacity and bladder and bowel control to receive potty training.

Some owners will follow the pup around or use crate training to prevent ‘accidents’ on the carpet. For some those methods may work well. Others will use a technique that is not generally recommended: paper training.

Paper training involves watching the dog carefully then moving it to spread out newspapers and allowing the dog to eliminate inside the house on the papers. There are also commercially available paper-like ‘rugs’ made of material that is supposed to attract the dog and minimize odors. This technique can help reduce rug cleaning and odors, but it builds in a bad habit early on that is more difficult to alter later on. The dog learns to eliminate in the house.

Also, once a dog urinates or defecates in a certain spot, rug or newspaper, they tend to return to the same spot. This can be a problem especially if the dog missed the paper by a few inches. It also de-emphasizes the need for the pup to give you a sign that they need to go outside. This short-term solution creates a larger, longer-term problem.

Golden Retrievers don’t require this kind of training. They learn quickly and are eager to please. Watch for signs of backing up, circling or squatting and quickly whisk them outside. Give lots of verbal praise and a nice pet when they go outside. Don’t strike the dog for going inside – never hit them for something they can’t control.

It’s equally important not to press their nose in it, since that has an effect the very opposite of its intention. Goldens will simply regard it as a normal smell and repeat the behavior. They don’t find feces offensive. In fact, Goldens will sniff and roll in other animals’ feces readily.

Just as important is avoiding pressing on their hind quarters to encourage them to squat. Though the problem is sometimes overstated, Golden Retriever’s are (like many large breed dogs who have been inbred over decades) prone to hip dysplasia. Don’t encourage any weakness of the hindquarters by stressing the dog’s rear end.

Most Golden Retriever puppies will learn quickly to defer their need to urinate or defecate (for a few minutes at least). This usually takes only a few days training. Some will require a couple of weeks to become consistent. If it takes longer than this, the dog may have developed some unfortunate habits, such as seeking out the same place inside the house. In those cases, a little extra ‘un-training’ will be needed. Commercial rug cleaners can help reduce the smell that attracts them to the same spot.

Even if your dog stays outside almost all the time which is not the best circumstance for Golden Retrievers, who enjoy human companionship you’ll want to make the effort to housebreak. Even older dogs will eliminate indoors if they haven’t been trained as pups.