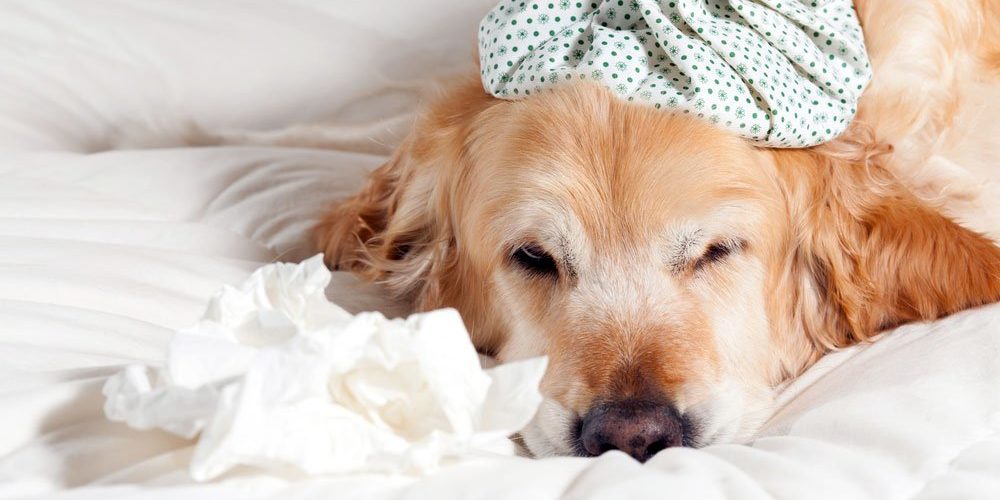 Apart from hip dysplasia, there are half a dozen common conditions or diseases that Golden Retrievers tend to suffer from. That’s not to say most Golden’s are unhealthy. They suffer no more than any other breed. But there are a group of afflictions that are more typically found among them than some others.

Skin diseases and conditions top the list of concerns for most Golden Retriever caretakers. Something as simple as a mosquito or flea bite can cause a small itchy section. Golden Retrievers are very mouthy and tend to chew what they can reach. That quickly produces a raw, moist patch called a hot spot that the dog tends to enlarge. Keeping them unable to reach it via a collar or bandage, or uninterested via sprays is the standard treatment.

Goldens also have a somewhat higher tendency than some other breeds to allergic reactions to certain food components. Wheat is a common part of many dry commercial dog foods. Though not toxic, dogs’ stomachs are designed to digest meat not wheat, and some individuals are sensitive to wheat, causing itching. That can be seen by excess paw licking or face scratching on the carpet or grass.

The first are typically benign and can be removed when the dog is already undergoing a procedure requiring anasthesia, such as a dental cleaning. They may enlarge, but in most cases they represent no health risk and can just be left alone for long periods. Liposarcomas, on the other hand, are malignant tumors and should be treated as soon as they’re diagnosed. When in doubt, see your vet and pay for a lab test.

Eye problems are common among older Golden Retrievers, with many getting cataracts past age 10 or so. Eventually these lead to reduced vision and even blindness. There’s little that can be done to treat the condition, unfortunately.

Golden Retrievers aren’t at high risk statistically for heart conditions, but when they occur it tends to be either subvalvular aortic stenosis or cardiomyopathy.

Subvalvular aortic stenosis is a form of obstruction in the left ventricle that reduces blood flow. In mild cases, the condition is harmless, though restricted activity may be required. In more serious cases, the heart muscle tissue thickens and the heart has to work harder to pump an adequate amount of blood. The condition is generally inherited and treatment varies from mild antibiotics to beta blockers. Surgery is an option, but it’s risky and has had limited success to date.

Cardiomyopathy is an acquired disease in which the heart muscle becomes thin and flabby. It tends to occur in dogs between the ages of 4-10 and the causes are largely unknown. It is progressive and ultimately fatal.

Despite the somewhat scary list, serious health problems in a well-cared for Golden Retriever are relatively rare and most live a long, healthy life. Proper diet and exercise, with appropriate screening is the best approach to optimizing their health.