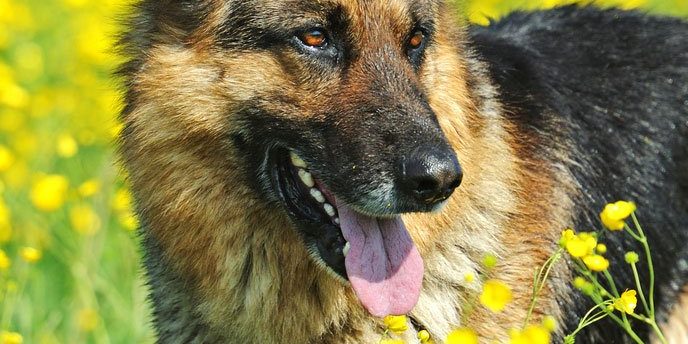 The breed is only just over 100 years ago, the deliberate product of a breeding program began by ‘The Father of the German Shepherd’, Rittmeister Max von Stephanitz. First gaining fame as working dogs in the German Army during WWI, the breed became truly famous with the introduction of Rin Tin Tin in the movies of the 1930s.

That fame was well earned as these stalwart dogs became police dogs, guide dogs and movie stars who demonstrated their intelligence and loyalty. German Shepherds are among the most highly respected breeds. The reasons are not far to seek. German Shepherds, or GSDs (translated from the German, Deutscher Schäferhund) are highly intelligent, extremely loyal and protective, and very beautiful.

A brilliant blend of gentility and assertiveness, these natives of Alsace are medium-sized (75-90lbs/34-41kg). The male is about 24-26 inches (61-66cm) at the withers (the top of the shoulder bones), the female slightly smaller. With a dual-tone coat – most commonly black and tan – and deep brown eyes, with perky ears and square heads, they look great in motion or at a stay.

There are several sub-breeds, even while still being considered purebreds. Pure white German Shepherds are in heavy demand, the result of both their native beauty and their even dispositions. There is also a long-haired variety that looks like the name. The color is still very German Shepherd-like, but the hair around the face and chest are much longer than the standard, slick look of the regular type.

Today, GSD’s are regulars at international dog shows, often winning top prizes easily after years of training, of course. Their lean, angular bodies and eagerness to perform complements well their innate beauty and good manners. For reasons best known to experts, the white and long-haired are considered ‘faults’ and both are often disallowed at shows. There’s no accounting for taste.

German Shepherds are justly famous for their ability to act as guard and rescue dogs and will bond with owner or trainer within a few months. They are strong enough to perform considerable work, but not overly aggressive by nature. Like most dogs, they have extraordinary scent detection abilities and so are widely used by police.

They enjoy training and are a delight to interact with. Yet, unlike other breeds such as Dalmatians or Retrievers, they don’t require constant activity in order to be calm and happy. They can be equally happy just watching from the sidelines. They can be content to walk calmly along a border on patrol or just lie on a porch and await the next game.

They’re good with children and don’t typically threaten the neighbors unless they’ve been trained to react when someone comes onto the property. They may growl or bark, however, since anyone not of ‘their pack’ is naturally suspect.

While very robust in general, German Shepherds do have health conditions which they are somewhat more prone to than other breeds. Bloat (GDV, Gastric Dilatation Volvulus) is possible and occurs when the stomach dilates as a result of an excess of fluid, and sometimes twists. Otitis Externa is an inflammation of the ear canal that frequently affects dogs with long ears, such as those of the German Shepherd.

But apart from diseases, GSDs are relatively easy to care for. Coat, nail and other aspects require only a small effort to keep them healthy and looking good.

German Shepherds have a double-layered coat comprised of a short, thick, wiry overcoat and a soft, dense undercoat. The fur sheds somewhat in Spring but requires only modest care. Bathing the water-resistant coat is needed only occasionally, while regular brushing is enough to keep the skin and hair healthy.

As with any dog, it’s important to search carefully for an individual that has a good genetic background. With the popularity of this breed, among the 10 highest in the USA, poor breeding programs have sometimes produced problematic dogs. Seek out a reputable breeder, insist on good documentation relating to Hip Dysplasia and other problems and you can generally rest easy.